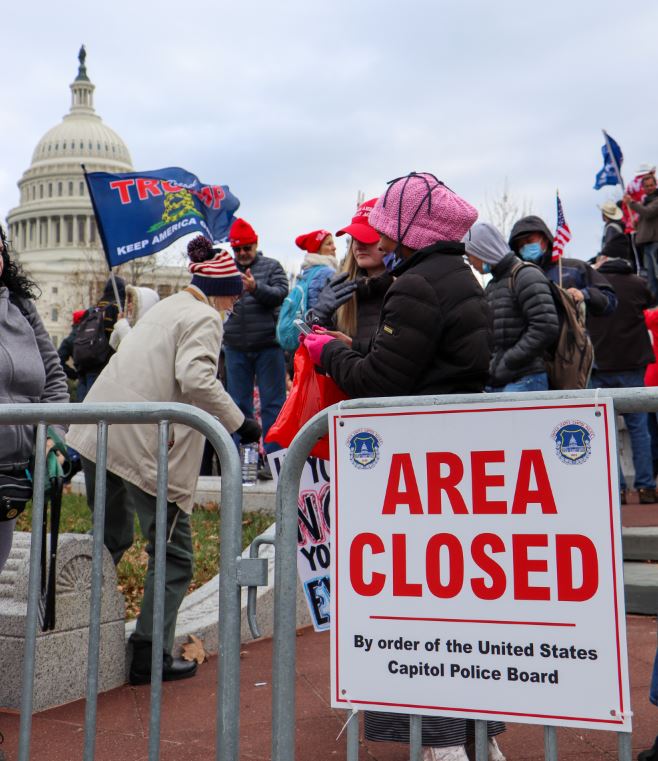 by Nico Portuondo and Jay Silver, Reporting from Washington

WASHINGTON — Illinois House and Senate members condemned the violent assault on the U.S. Capitol Wednesday as a “shameful chapter in our nation’s history” and “a coup” when pro-President Donald Trump mobs ransacked the Capitol and temporarily derailed Congress’ process of certifying electoral votes.

“The storming of the Capitol was a coup attempt with the purpose of overturning the election with a newly elected President,” said Illinois Republican Rep. Adam Kinzinger in a video message to constituents late Wednesday. “I stand to reject this chaos and condemn the President to allow this to happen.”

As rioters breached the building, members of Congress, staff and journalists were forced to evacuate the building and don escape hoods as tear gas was fired into the chambers. Four people died in the riot, including one woman who was shot and killed by a member of the Capitol security force.

“This shameful chapter in our nation’s history is the real legacy of Donald Trump,” said Senate Minority Whip Richard “Dick” Durbin, an Illinois Democrat, in a statement on Twitter following the insurrection. “On January 20, we can begin the process of healing the wounds of this country and start to put this national nightmare behind us.”

Some representatives said Trump was the one who incited the riots, in particular by holding a rally Wednesday outside the White House attended by thousands of protesters. Many of them then marched to the Capitol.

Supporters of the President noted his supporters were demonstrating, as many other citizens have, to express their political views, and that there was never a call by the President for people to engage in violence or attack the Capitol. On Thursday, the day after the riot, White House Press Secretary, Kayleigh McEany issued a statement condemning the violence. President Trump later issued his own statement on video, conceding his loss in the election and condemned the violent actions that had taken place.

In an interview with CBS News, Illinois Democratic Sen. Tammy Duckworth said that it was Trump’s fault. “I never in my entire adult life — serving first in the Army and now in the legislative branch — would imagine that it is a president of the United States of America who would be the one to incite violence,” she said.

In addition to Rep Adam Kinzinger (R), several other Illinois Republicans took to Twitter to inform constituents of the events.

Rep. Darin LaHood expressed his disapproval of the actions taken by rioters, calling the takeover “one of the most shameful things I have ever seen.”

On Thursday, Kinzinger announced that he believes Trump should be removed from office under the 25th Amendment, an extraordinary measure only used when the acting president is unable to perform his duties.

“All indications suggest that the president has become unmoored, not just from his duty or even his oath, but from reality itself,” said Kinzinger in a video on his Twitter page. “It is time to invoke the 25th Amendment and to end this nightmare.”

Yet, two cabinet secretaries resigned following the attack on the Capitol, Transportation Secretary Elain Chao, who is also the wife of Senate Majority Leader Mitch McConnel, and Education Secretary Betsy DeVos, who cited the President’s rhetoric as a reason for her resignation. Former White House Chief of Staff, Mick Mulvaney, who was appointed to be an emissary to Ireland, also said he could no longer serve the President. The President’s term in office expires in less than two weeks, at noon on January 20, 2021.

“Donald Trump encouraged a violent assault on the US Capitol to prevent Congress from exercising our constitutional duties,” said Rep. Chuy García, an Illinois Democrat, in a tweet Wednesday. “I voted to impeach Trump once before, and I would do it again. He should be removed immediately.”

Following the siege, Congress reconvened to certify the election results, which occurred early Thursday morning after objections to the electoral votes of Arizona and Pennsylvania forced debates in the House and Senate. Both motions to object were rejected near unanimously in the Senate while in the House more than half of the Republican caucus, including Illinois Reps. Mike Bost and Mary Miller, voted to object the results of Arizona and Pennsylvania.