Chicago — Based on data from scientists and health experts and after consulting with stakeholders across the state, Governor JB Pritzker announced that he will sign a modified version of the state’s stay at home order that will go into effect on May 1 to continue the life-saving progress made over the last month while also allowing residents additional in the safest way possible.

In conjunction with today’s announcement, the Governor released modeling today put together by top academic institutions and researchers in Illinois that predicts the course of coronavirus in the state over the coming months. On our current trajectory, the state is projected to see a peak or plateau of deaths per day between late April and early May, but if the stay at home order were lifted this week, the model anticipates a second wave of the outbreak in Illinois starting in May, which would claim tens of thousands of lives and greatly exceed the state’s hospital capacity.

“Make no mistake, Illinois has saved lives. By staying home and social distancing, we have kept our infection and death rates for the months of March and April thousands below the rates projected had we not implemented these mitigation strategies,” said Governor JB Pritzker. “I know how badly we all want our normal lives back. But this is the part where we have to dig in and understand that the sacrifices we’ve made as a state to avoid a worst-case scenario are working — and we need to keep going a little while longer to finish the job.”

Lifting mitigation measures is only possible with widespread availability and access to COVID-19 testing, tracing and treatment. The data show that if the state were to lift mitigations abruptly this week, this would result in a second wave of infections, hospitalizations and deaths.

After consulting with doctors, scientists and experts in Illinois and across the world, the Governor has announced he will sign a modified version of the state’s stay at home order that will go into effect on May 1 and extend  through the end of the month. The modified order will strengthen the state’s social distancing requirements while allowing residents additional flexibility and provide measured relief to non-essential businesses in the safest way possible.

The new executive order will include the following modifications effective May 1:

The Illinois Department of Public Health will also be issuing guidance to surgi-centers and hospitals to allow for certain elective surgeries for non-life-threatening conditions, starting on May 1. Facilities will need to meet specific criteria, including proper PPE, ensuring enough overall space for COVID-19 patients remains available, and testing of elective surgery patients to ensure COVID-19 negative status.

While earlier projections relied on data from other countries applied to the United States, the modeling released today analyzes two months’ worth of daily data on COVID-19 deaths and ICU usage here in Illinois.

Top researchers from the University of Illinois at Urbana-Champaign, the Northwestern School of Medicine, the University of Chicago, the Chicago and Illinois Departments of Public Health, along with McKinsey and Mier Consulting Group working on behalf of the City of Chicago and Cook County, worked on these projections as a cohort under Civis Analytics, a data analytics firm with experience spanning the public and private sectors.

According to the state model, the stay at home order is having its intended effect of flattening the curve in Illinois.

Without the stay at home order, the model estimates there would have been10 to 20 times as many deaths to date and that the peak death rate and peak resource usage would have been 20 to 30 times what we will see with mitigation. Moreover, these counts do not account for deaths due to lack of access to health resources, so the actual number would likely have been even higher.

If the stay at home order were lifted this week, death rates and hospitalizations would start rising sharply by the middle of May. It’s projected that the peak death rate and peak resource needs would be almost as high as if there were never any mitigation measures put in place. Over the course of the current outbreak, the model estimates there would be 5 to 10 times more deaths than we would see if we continued mitigation.

In either of the above scenarios, as much as half of the state’s population could be infected with COVID-19 at once, which would overwhelm the health care system and result in more deaths.

As a further caution against relaxing mitigations without carefully considering the consequences, the model estimates that the number of infectious people is likely similar in size to when the order began. Even as hospitalizations and deaths are starting to decrease, there are still enough active cases to lead to a second wave. Fortunately, the stay at home order has prevented most of the population from becoming sick, but that also means that most of the population remains vulnerable to the virus.

Maintaining our current vigilance to controlling this outbreak is crucial. Models contributed by UIUC and UChicago project a peak or plateau of daily fatalities between late April and early May. The median and range of daily deaths, within a 95% confidence interval, are illustrated below.

Both of these projections indicate that after the peak, we should expect it will take longer for deaths to decline to pre-epidemic levels than it took for them to rise, underscoring the importance of staying the course over the coming weeks and months. 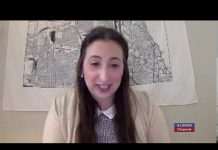