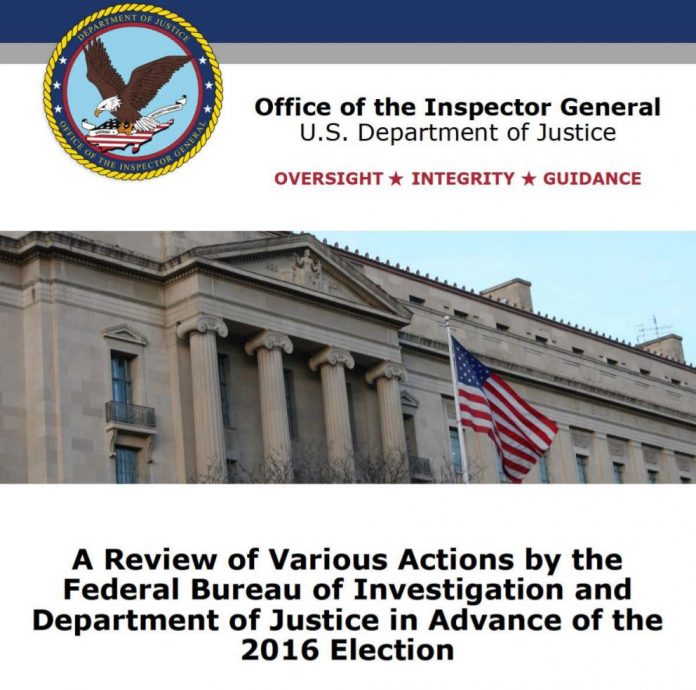 Washington, DC – August 29th. The bottom line is former FBI Director James Comey broke enough protocol, norms, and policies established by the FBI over years, that many say he would certainly be fired NOW, if he had not been already.

The other bottom line is that, based upon this investigation, Comey will not face prosecution. But this is one of several investigations on-going into the events that took place during the 2016 election cycle and following the start of the Trump administration.

Those investigations, are looking beyond the purview of what happened WITHIN the Department of Justice and the FBI, to determine if there were illegalities engaged in by leadership within the FBI and others in the private sector, or even within other allied intelligence services — conspiring to either stop Trump from winning election, or to find a way to remove him from office if he was elected.

This report by the DOJ Inspector General, Michael Horowitz is one of two he will release. This one focused on Comey’s actions, but the second report is looking at the larger issue of what were agents of the FBI doing, did they engage in a conspiracy to create a false narrative of the Trump team working with the Russians, so that they would have a pretext to spy on Trump and his people?

The report takes former Director Comey to task for violating FBI policies and leaking information to a friend so that the friend would give a memo to the press — among other faults found against Comey. But also finds fault with other FBI agents, and their unprofessional behavior and in violating FBI protocols, and in so doing damaging the reputation of the Bureau.

The report looked at political bias within the FBI and generally found that the decisions made of the Clinton emails investigation and that into whether the Trump campaign was in cahoots with Russian agents, were NOT based on a political agenda.

But a number of parts of this report seem to defy that conclusion that political bias was not at play. In the Executive Summary of the report, referring to the very biased emails between FBI agents Peter Strzok and Lisa Page, [both anti-Trump, who were having an affair] the summary states…

In the aftermath of this report, new standards and practices for the FBI will be implemented to insulate the FBI from overt political behavior by agents that can impact an investigation due to political bias.

“Although no bias or other improper consideration was found in the FBI’s decisions or actions, the appearance of bias is disconcerting and potentially damaging to the FBI’s ability to perform its mission. Accordingly, the FBI is instituting new political bias training, drawing from, among other sources, the training, guidance, and practices of the federal judiciary. To commence within 120 days, training will begin with senior leadership and the Senior Executive Service (SES) ranks, with the objectives of discussing the OIG Report, lessons learned, and the need for scrupulous, unwavering adherence to the policies and procedures intended to combat potential political bias”
.