Washington, January 3, 2019 – Rep Nancy Pelosi became the first US House Speaker to hold the office for a second time after having lost control of the House, sine Rep Sam Rayburn of Texas regained power for a second time in January 1955.

Pelosi took the oath of office as Speaker to lead the 116th Congress as she was surrounded by her grandchildren and the children of other House members, as she stood at the dais of the House Chamber.

The number two position for the Republicans went to Rep Steve Scalise, who survived a gunshot wound in an assassination attempt two years ago, when a gunman opened fire on House Republicans on a baseball field.

Rep Steny Hoyer (D-MD) will serve as the House Majority Leader, continuing his position as the #2 Democrat in the House. Hoyer’s daughter, has worked for the University of Illinois’ Alumni Association. Hoyer is also a fan of Abraham Lincoln, who made it a point to visit the Lincoln Presidential Library in January 2007, just after he and Pelosi first took over control of the House.

House Democrats take power in the midst of a government shut-down that’s closed portions of the Federal Government as Pelosi and her party stand opposed to giving President Trump additional funding for construction of a border wall along the border with Mexico. The President is seeking $5 Billion. Pelosi told NBC news in an interview that she would not want to give the President anything for constructing a border wall.

One agent to the press that a border wall “was absolutely” necessary. The agent told reporters that prior to a border wall being built in one area along the border several years ago, drug smuggling was “out of control” Following the construction of the border in that area the agent said illegal immigration fell precipitously.

While there have been government shutdowns in the past, this is the first time a new US Congress was sworn-in while portions of the government was shutdown. At this time, the position of the President and Speaker Pelosi remain far apart. But Pelosi’s own election as Speaker within her party was somewhat in question before today, with some of the new members, from the far-left wing of the Democratic party, saying they would vote against her, and against her proposal for the establishment of House rules.

Because Pelosi first had to get past the opening of the new congress, and her becoming House Speaker, a number of political observers said that no real negotiations could take place between Pelosi and the President until after she was officially House Speaker. 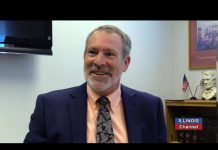 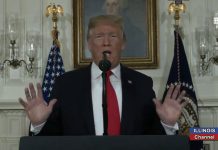 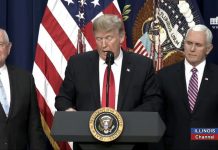 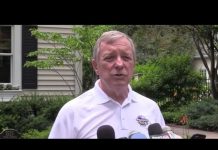