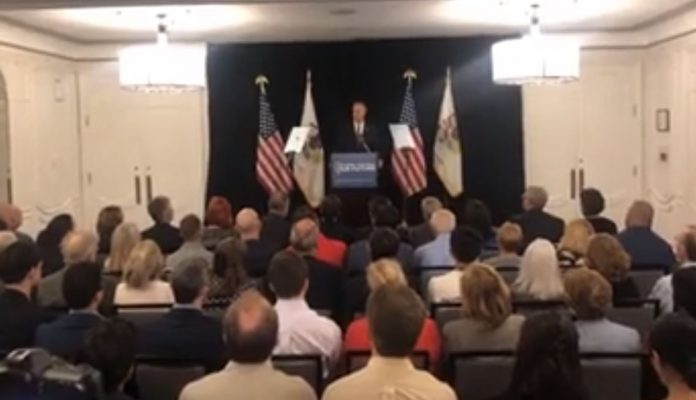 Governor Rauner was endorsed by the state’s four most prominent business groups that support his goal of reducing the tax and regulatory burden to grow the Illinois economy.

He released the following statement following endorsements by the National Federation of Independent Businesses, Associated Builders and Contractors, Illinois Chamber of Commerce, and Illinois Manufacturers Association.

“It is a tremendous honor to receive endorsements from the NFIB, ABC, Illinois Chamber of Commerce, and IMA. I am committed to making Illinois the best state in the country to start and grow a business. We will continue working every day to grow the Illinois economy by reducing the tax and regulatory burden on our businesses to create more good-paying jobs.” – Governor Bruce Rauner

ABC President Alicia Martin released the following statement:“ABC endorsed Bruce Rauner for Governor in the fall of 2013. We did so because we firmly believed Governor Bruce Rauner would make a positive impact on the economic well-being of ABC members and the construction industry. Given the accomplishments of Governor Rauner over the past almost four years, we were right to endorse him then and we are right to endorse him for another four-year term.”

“When he took office nearly four years ago, Illinois small businesses were struggling to keep their heads above water and to compete with business in the region. Today, they are firing on all cylinders, hiring more workers, paying higher wages and growing their businesses. They know that Governor Rauner and his economic and government reform agenda is a major reason why.

“…Despite well-funded and entrenched opposition, Governor Rauner has never backed down. He remains deeply committed to policies and legislation that will help attract and keep jobs in the state.

“On behalf of our dues-paying members throughout Illinois, I’m proud to announce the NFIB Illinois PAC’s endorsement of Bruce Rauner for a second term as governor.”

“The IMA endorsed Bruce Rauner four years ago because Illinois could not afford a Governor who created a hostile business climate with more spending and higher taxes. Four years later, voters in this state could not have a sharper contrast between the two candidates for Governor. JB Pritzker supports raising taxes and spending taxpayer money without accountability as far as the eye can see. The choice is clear as Bruce Rauner is the only candidate that will protect your pocketbook and that’s why manufacturers across this state are endorsing him for Governor today.”

Baise said taxes and spending were not the only reasons for the endorsement, but JB Pritzker’s “lack of transparency” on a wide-range of issues was startling.
“We are less than two months away from the election and Pritzker refuses to discuss any specifics on the myriad of tax hikes he will impose on businesses and families across the state. In addition, there is no desire to solve – or even discuss – possible solutions to the pension crisis facing the state.

On the other hand, Pritzker has already outlined more than $10 billion in new spending according to recent media reports. Election day is right around the corner and voters need to understand the fiscal calamity facing their pocketbooks next year,” added Baise.

Rick Delawder, President of SWD, Inc. and Chairman of the Illinois Manufacturers’ Association released the following statement:
“The business community needs a Governor who understands the challenges facing employers and taxpayers every day. As a family owned manufacturing business, we’ve seen some tough times in this state due to policies that make it difficult for us and our customers to compete and grow our businesses. Higher taxes, higher spending and more regulations do not create jobs or result in higher wages and greater investment. JB Pritzker’s tax and spend solutions are something we cannot afford and that’s why we are endorsing Bruce Rauner for Governor.”

Todd Maisch, President and CEO of the Illinois Chamber of Commerce, released the following statement:

“Governor Rauner has consistently stood up for businesses here in Illinois. The governor has been a champion for reducing the tax and regulatory burden that is holding back economic growth, and we at the Illinois Chamber of Commerce are proud to stand behind his message for cutting taxes and creating jobs for hardworking Illinois families”