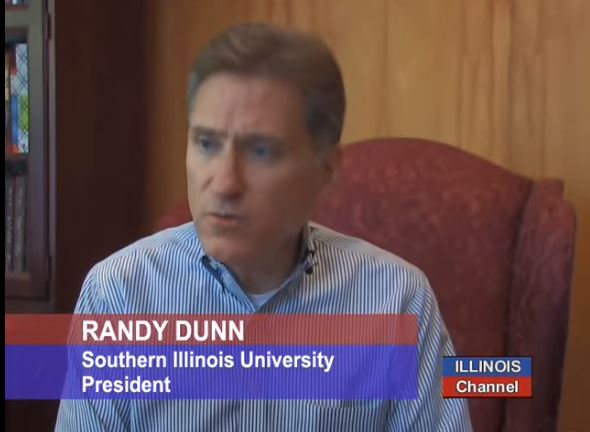 Carbondale, July 14th – at a meeting held on the SIUC campus this coming Monday at 10 am, SIU President Randy Dunn will be officially leaving his position as the President of the SIU system.

Dunn’s removal comes as documents were released earlier this week that showed Dunn was apparently working behind the scenes to have SIU Edwardsville break off to become a separate university, and shift about $5 Million in funding that currently goes to SIUC to the SIUE campus.

The idea to make SIUE a separate university was part of the discussion held in the legislature this spring, as Rep Jay Hoffman, who has SIUE in his district, had pushed to allow the Edwardsville campus of Southern Illinois University to become a separate university. That did not pass, but lawmakers had said they would consider the arguments of the idea.  Student population at the Edwardsville campus has been growing, while the population of students in Carbondale has fallen sharply over the last decade.

Just last December, President Dunn was interviewed by the Illinois Channel in which he spoke of the difficulties of running a state university in recent years when no state budget was being passed and the universities were operating without hundreds of millions of dollars in state aid that is a significant part of their operating budgets.

At the Board meeting in Carbondale on Monday, members will consider appointing J. Kevin Dorsey as the interim President of SIU.  Dorsey is a retired Dean of the SIU School of Medicine. Dorsey’s compensation as President will be $430,000 a year.

Randy Dunn is expected to receive a six-month severance payment of $215,000.  Beginning in January, Dunn will reportedly join the teaching staff at SIU-Edwardsville.  Dunn had begun his tenure as the SIU President in 2014.