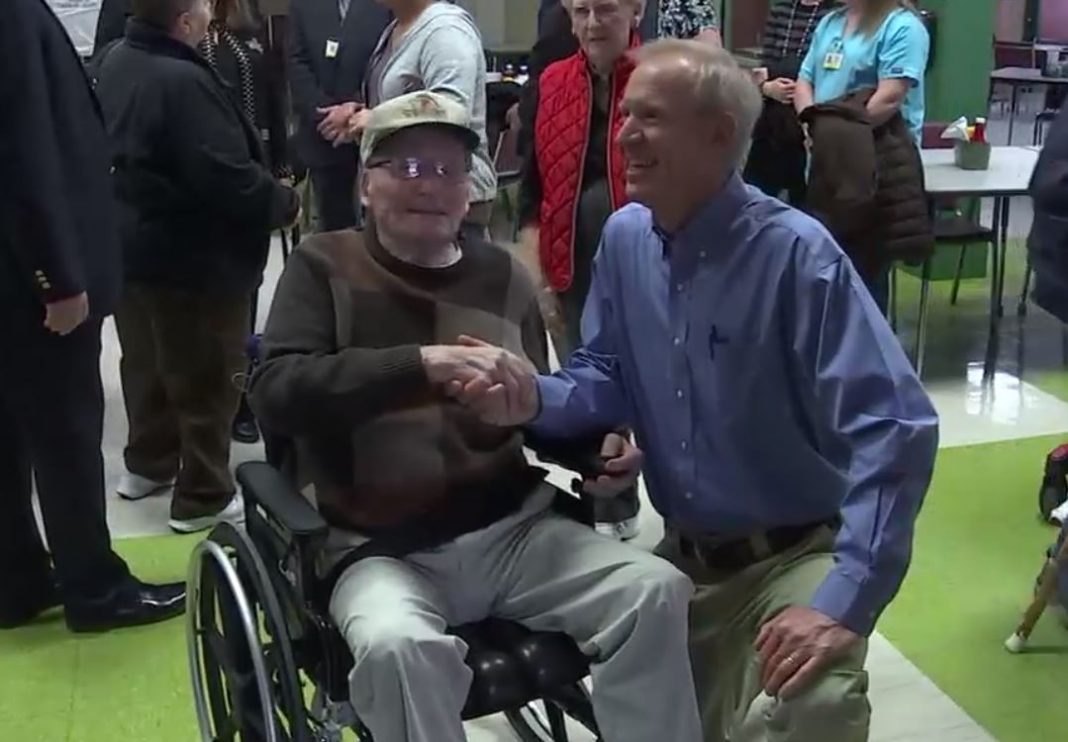 QUINCY (Jan. 10, 2018) — Gov. Bruce Rauner today laid out his plan for minimizing Legionella bacteria risks at the Illinois Veterans Home at Quincy, where he spent a week in residence to assess for himself the levels of service and care being provided at the facility.

The governor spent seven days and nights at the Quincy campus, site of a deadly Legionnaire’s outbreak in 2015. He showered in and drank the water; dined, mingled and played games with residents; personally thanked the residents for their service to our country; and spent much of his time studying medical, water treatment and patient care protocols at the home.

“Some have said they want this home to close,” Rauner said at his post-stay press conference. “I came here because I wanted a first-hand experience with the home and its staff.

“Let me be crystal clear. I do not support closing this facility,” he said.

“We have challenges. These facilities are old. We need to make investments in them,” he said, “and now that we have support from U.S. Senator Durbin and bipartisan members of the Illinois General Assembly, it is time to take action.”

That Legionaires’ disease took lives in Quincy, is now a growing issue in the race for governor, with Democrat JB Pritzker attacking Gov Rauner’s motives, and issuing a statement calling his staying at the Quincy Veterans home “a stunt.”

“Two and a half years later and 13 lives lost and Bruce Rauner is first waking up to the tragic crisis he let spin out of control on his watch,” said JB Pritzker. “This too little too late political stunt will do nothing to make up for Bruce Rauner’s fatal mismanagement and unconscionable failings while he was in charge of our state. Our veterans and their families served our country and deserve to live in dignity. Instead, they were entirely failed by a governor who refused to take charge of this state.”

The governor’s office says he has outlined a plan for addressing the home’s needs. It included a commitment from Blessing Hospital in Quincy to deliver Legionella test results within hours (rather than days) of receiving specimens. The Illinois Department of Public Health is launching a similar lab service for all health facilities in the state.

The plan also includes upgrading the plumbing systems using the latest materials and technologies, a phased installation of point-of-use faucet filters, and working with the city of Quincy to find a new water source for the home.

Additionally, Rauner is appointing a Veterans’ Capital Needs team to develop a forward-looking investment strategy. The team will be made up of health experts, veterans’ advocates, state legislators, federal officials and administration staff.

“We want to eliminate every possible risk and take every possible step to continuously improve the delivery of health care services to this group of American heroes,” he said.

Additionally, officials will continually review water-treatment processes already under way as recommended by the U.S. Centers for Disease Control and the Illinois Department of Public Health.

Legionella is waterborne bacteria that can cause a severe form of pneumonia. The elderly and those with underlying health issues are particularly vulnerable.