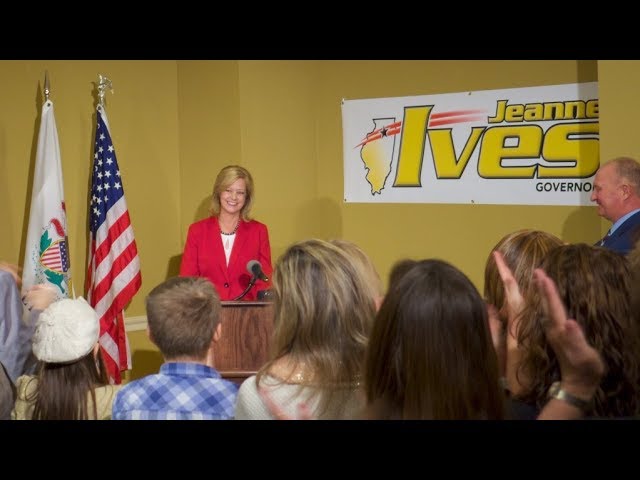 Campaign 2018 — Rep Jeannie Ives (R), who is challenging Gov Rauner for the Republican nomination for Governor, responded to the recent release of the Governor, who had listed his top ten accomplishments in his firrst term, by releasing what she claims are his Top Ten Betrayals to Republican voters, who had supported him for election.

From the Ives Campaign:
Benedict Rauner’s 10 Betrayals in 2017

1. Folding to Madigan. From State Rep. Peter Breen, House Republican Floor Leader, “I personally observed him badly botch negotiations with the General Assembly on a variety of subjects, finally getting to the point where Governor Rauner couldn’t even be in the same room as House Speaker Mike Madigan. Madigan is the one guy who Rauner promised to stand up to, but he can’t or won’t even enter the arena for that fight.”

2. HB 40. From the man who said he had “no social agenda” Benedict Rauner told Illinois families he would veto the legislation. He committed to the GOP legislative caucuses that he would veto the legislation. Instead he became the first governor in U.S. history to initiate taxpayer funding for abortion on demand, all nine months of pregnancy. This creates a new, open-ended entitlement at a time when Illinois has $16 billion in unpaid bills to vendors and social service providers.

3. Sanctuary State. From the man who said he had “no social agenda” Benedict Rauner joined leftist governors like California’s Jerry Brown in designating Illinois a “sanctuary state” the effect of which is inhibiting the cooperation between local, state and federal law enforcement. This legislation make Illinois families less safe.

4. Trans Birth Certificates. From the man who said he had “no social agenda” Benedict Rauner signed legislation to allow individuals to change the sex listed on their birth certificate. Dr. Michelle Cretella, President of the American College of Pediatricians, recently wrote: ‘No one is born transgender. If gender identity were hardwired in the brain before birth, identical twins would have the same gender identity 100 percent of the time. But they don’t. Biological sex is not assigned. Sex is determined at conception by our DNA and is stamped into every cell of our bodies. An identity is not biological, it is psychological. It has to do with thinking and feeling. Thoughts and feelings are not biologically hardwired. Our thinking and feeling may be factually right or factually wrong.’ Rauner’s legislation will put grown men in women’s bathrooms with girls and boys in girls’ locker rooms.

5. Public Sector Utility Bailout. Rauner negotiated a $2.35 billion bail out of a company that makes over $2 billion in profit a year – that doesn’t make sense. Since Illinois produces 40% more electricity than we consume, our residents are subsidizing cheaper power to residents in other states. And the same crony subsidy Exelon argued for in IL, they argued against for their competition in Ohio.

7. Rauner Promised the State Income Tax Would be Down to 3% by the End of His First Term. Instead, it’s back up to Pat Quinn levels at 4.95%. Rauner saw 15 of his bought-and-paid for House Republicans vote with Mike Madigan to pass the 32% increase while he sat impotently by.

8. Same old politics. Rauner won’t answer questions about the dismissal of his former general counsel and a memo surfaced suggesting that Rauner was intent on using state resources for political purposes, one of the bases that sent two former governors to federal prison.

9. No Action on the State’s Two Largest Issues: Pensions and Property Taxes. In a 2014 campaign ad, Bruce Rauner blasted Pat Quinn for property tax rates that were the second highest, saying ‘He just doesn’t get it.’ Today, according to the Wall Street Journal, ‘Property taxes in Cook County and Chicago’s “collar” counties are the highest in the country outside of California and the Northeast. In 2014, Governor Rauner repeatedly said he would replace traditional pensions for public workers with 401(k)-style retirement plans. Three years later, Fitch Ratings reports that Illinois’s unfunded pension liabilities equaled 22.8% of residents’ personal income last year, compared to a median of 3.1% across all states and 1% in Florida.’

10. “I am not in charge.” Rauner ended the year with a Freudian slip, admitting that he has ceded control of Illinois to Mike Madigan and Chicago Democrats.

“Is this the new face of the Illinois GOP? Will Republicans accept their thirty pieces of silver to continue backing Benedict Rauner, orwill they reject him in advancement of their stated values and principles? On March 20, we will find out.”