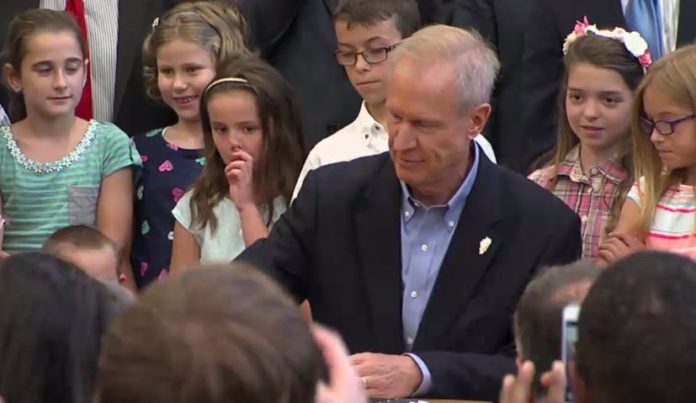 Chicago, Aug 31, 2017 –– In a rather rare display of a bipartisan celebration of the passing of legislation, House and Senate members of the legislature, as well as Mayor Rahm Emanuel of Chicago, joined Gov Bruce Rauner to applaud the passage of a new education funding formula for dispensing education dollars to school districts around Illinois.

The bill was in the works for years, and began its journey under another title, SB-1.  But after that bill passed in May, the Governor issued an Amendatory Veto on August 1, and introduced a variety of new issues to the debate.

When the Illinois Senate voted to override that veto, the focus changed, when the governor’s office wanted to avoid another political embarrassment, and when it was obvious the changes issued in his AV, would not have the support of even the Republicans in the legislature.  What also changed was the bill number, and the guts of SB-1, were placed into SB-1947.  The debate that focused over the last two weeks between leaders on education in the General Assembly, produced a product that included portions that both sides hated, and which both sides of the aisle could support.

But the primary change to education from the bill, is that the manner in which the funds are dispersed to school districts around the state, has now changed in such a way that districts in low-property value areas, and schools that are in agricultural areas that have little residential or commercial properties to tax, will no longer be forever short-changed on funding for their students.

For Rep Bob Pritchard (R), who spent a career as an educator, and worked on education issues in the House, it is a crowning piece of legislation, as he decided to leave the legislature at the end of his term in January 2019.

For Sen Andy Manar (D), who spend a great deal of his focus over the last three years on pushing for a rewrite of the school funding formula, it may be looked on as having been the issued that raised his profile around the state, as one of the more accomplished senators. His children attend a small rural school district in Central Illinois. In his remarks, he thanked both Sen Kim Lightford (D) who he credited for her hard work, and for picking him up when he was down.   He also selected Education Secretary, Beth Purvis, for her work on the bill.

“Today, we are finally fixing the least equitable school funding formula in

the entire country,” Manar said. “This law, which was a result of years of bipartisan negotiations,  wages war on poverty in the classroom by investing in our neediest students first. For the first time in generations, every student will finally have access to a quality education.”

Under the new plan, schools will be funded through an evidence-based model, that implements 27 “best practices” in education that have worked in other areas. The new law also prioritizes funding for schools that are the farthest away from a funding level deemed to be “adequate.”

The model ensures no schools lose money, eliminates the current system of winning and losing school districts, and offers financial certainty to school districts annually when they embark on crafting their budgets for the upcoming school year.

Manar told the crowd the journey to bring this bill to passage was long and difficult. Referring to negotiations, he said “To say our conversations became heated at times, would be an understatement.”

Manar credited his counterpart, Sen Jason Barickman (R) of Normal,  for his efforts and said that Barickman frequently said to Manar at an impasse, “We need to find the middle ground.”  This major issue, may also be seen as a political accomplishment, and as an issue that raised his profile within the Republican party

Credit in the House, goes too to Rep Will Davis (D) sponsored the bill, and worked the politics within the House to find some middle ground that both sides could live with, when the votes for passage seemed impossible to come by.  He is respected by members of both parties, and was recognized too at today’s ceremony for his efforts in getting this legislation passed.

Virtually everyone made the point, that this legislation was a true compromise, where neither party got all they wanted.  But Chicago schools ended up getting more money than they would have under SB-1, which the Governor called a “Chicago bailout.”

The Governor got a private-funded scholarship program, of up to $75 million, where private donations can be made to a fund, and donors can deduct 75-percent of their donations off of their state taxes.   This was a key sticking point for Democrats in both the House and Senate, who were  — and are — against this portion of the bill.  With the scholarship funding, students in poor or failing districts can apply to get the funds to go to a private school of their choice.