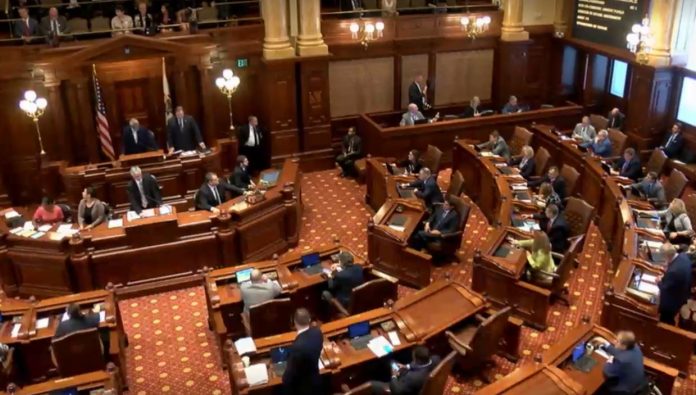 State Capitol:   After the Illinois Senate voted to approve the bill changing the state’s formula for distributing money to school districts around the state, Senator Andy Manar (D), one of the primary authors of the bill — told reporters this effort began years ago.  In fact, Manar said, it started years before he was elected to the Senate.

Those years of effort to bring this bill to the point of passage, was why Democrat, Sen Kimberly Lightford, said in debate that this was a historic vote.

She added, “And when we first began this effort, we were told it couldn’t be done.” But noted, that the process to pass major legislation can take 20 years.

A minor part of the spending in the bill, but a major political problem for Senate Democrats, as in the House, is the provision that sets up a privately funded scholarship plan, that offers 75-percent tax credit for those donating to the fund, up to $75 million.  The teachers unions, major supporters of Democratic members, strongly objected to the provision, which was one of the Governor’s key objectives.

The scholarship funds  would allow the families of students to apply for the money to go to a private school of their choice.  But while the state is spending over six billion dollars on K-12 education, the private scholarship funds will only cover the cost of 5000 to 10,000 students, out of some 2,000,000 students statewide. Still, the teachers’ unions claimed this was a voucher plan and remain so strongly opposed to this provision, they plan to fight it’s implementation.  It won’t be available, until the school year beginning next fall.

The vote to pass the bill in the Senate on Tuesday was quiet and unexpected, when contrasted against yesterday’s House action, which was a three-ring legislative circle, that saw the education funding bill voted down by a large margin in the House — only to have it then pass by a strong margin 80 mins later.  In between, House members tried and failed to override the Governor’s veto of SB-1, the previous version of the education funding formula.  And that was all due to the strong objections of the scholarship funds by many House Democratic members.

But in Tuesday’s debate, Sen Andy Manar told his colleagues, that as he drove into the Capitol, he passed by many children waiting for the bus.  He said he asked himself, if this bill will help them have more equitable funding in their schooling than the previous generation of Illinois students?

“And the obvious answer is yes.”

Manar said than no longer will those schools and students around Illinois in small agricultural towns and areas of low property values be subjected to the one of the worst education funding formulas in the nation.

The would distribute funds to schools based on the cost of what it takes to educate children at a “adequate level” in their district, taking into consideration the cost of educating children will differ around the state.  Manar said that the previous formula treated every district the same, when in reality the costs vary widely.

Republicans like that there are provisions for lowering property taxes in some districts, where the funding levels are at 110-percent of what is deemed adequate, based on the formula. If that is the case, a property tax reduction measure can be voted on locally.  It provides mandate relief to local districts giving administrators greater flexibility on how to spend their education dollars to meet the needs of their district. And it moves the additional money that Chicago Public Schools are getting for a pension payment back into the pension fund, and out of the school budget.

Aside from how the money is distributed, it also increases education funding in the budget by $350 million over last year.

After the many years in formulation, and the heavy hand of political maneuvers in getting the legislation through the House and to the Senate, including a governor’s veto and an override of the previous version of the education bill, this final version passed with strong support on both sides of the aisle. 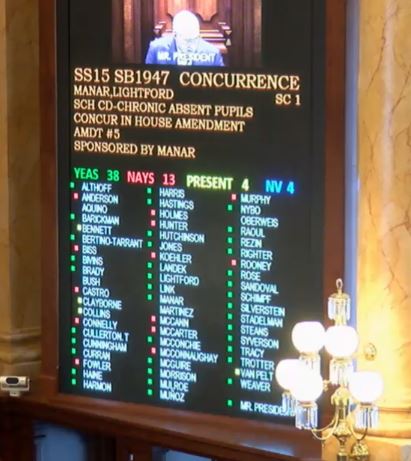 e bill now goes to the Governor, who is expected to sign it in the next few days.