SPRINGFIELD – It’s still weeks away, but around Illinois there’s increased activity to prepare for the few moments when day becomes night, on August 21st, as the moon creates a total solar eclipse through parts of southern Illinois — with a partial eclipse visible in a much broader area.

For those preparing to travel to the area of Southern Illinois, where the total eclipse of the sun will take place, IT IS IMPORTANT THAT YOU FIRST GET SPECIAL ECLIPSE GLASSES to protect your eyes!
These are available for purchase online, for as little as $2, but you need to make sure they are labeled ISO Certified.

Experts say, that when you watch a partial eclipse you must wear eclipse glasses at all times if you want to face the sun.  If you’re not going to face the sun, you can use an indirect method.  This can be done by putting a small pin hole into the side of a box, and having the sun shine through that pinhole, which will cast an image of the eclipse onto the back of the box, in much the same way a camera lens sends an image to a camera sensors.

And if you’re in a spot where there will be a TOTAL ECLIPSE, you must still where the special glasses [ sun glasses are not dark enough to protect your retina]  until the time when the sun is completely and totally blocked.

Only during the short time when the moon completely obscures the sun – known as the period of totality – it is safe to look directly at the star, but it’s crucial that you know when to take off and put back on your glasses

The eclipse will arrive in the St. Louis area, about 3 minutes before it reaches Carbondale.  Because St. Louis is on the northern edge of the area where a total eclipse is visible, it would be best to be positioned to the south side of St Louis.  Approximately 30 miles south of downtown would extend the period when the eclipse is total. 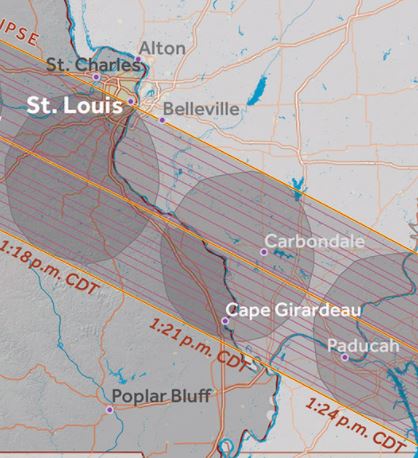 In Carbondale, which has been called the best place to view the total eclipse, the period of totality will happen at 1:21 pm CT.  There the total eclipse will last for proximately 2 1/2 minutes, as the shadow of the moon moves across the landscape of the planet at nearly 1500 mph.

Among those preparing for the eclipse and the crowds that will swell the southern portion of the state, is IDOT.

Although the sun might go missing for a little while, the Illinois Department of Transportation promises to stay active leading up to the solar eclipse to make sure traffic keeps moving and the traveling public remains safe.

Carbondale is in the path of the total eclipse, making it one of the prime viewing areas in the country for the Aug. 21 event. The rest of the state will experience a partial eclipse of approximately 90 percent.

“The Illinois Department of Transportation is proud to be one of several state agencies teaming up to make sure that Illinois is prepared to host this historic occasion,” Illinois Transportation Secretary Randy Blankenhorn said. “We also need the public to do its part. By following a few basic guidelines, the eclipse can be safe and exciting for everyone.”

Up to 200,000 people are expected to visit southern Illinois to view the eclipse and take part in local festivities in the days leading up to it.

Unlike some states, Illinois is placing no special restrictions on truck activities due to the eclipse. To help with traffic flow, lane closures on major IDOT projects in the southern part of the state will be temporarily lifted during the weekend before the eclipse and the following day. Throughout the state, digital message boards will be used to communicate traffic and safety messages.

The department also is coordinating with Illinois State Police and local law enforcement to ensure that traffic control points are appropriately staffed.

If you are traveling during the eclipse, here’s some commonsense tips from IDOT:

Plan ahead: Do not expect to park and view the eclipse from the side of the road.

Do not wear special viewing glasses or take photos of the eclipse while driving.

On the day of the eclipse, drive with your headlights on.

Use the Getting Around Illinois website to get the latest on traffic conditions.

To help answer questions about the eclipse, IDOT has created a special page on its website.