From the State Capitol:  Sen. Andy Manar and other members of the Democrat caucus, held a press conference on Friday, to charge the Governor’s office with “a serious violation of trust” and acting in bad faith in the effort to reform school funding in Illinois. 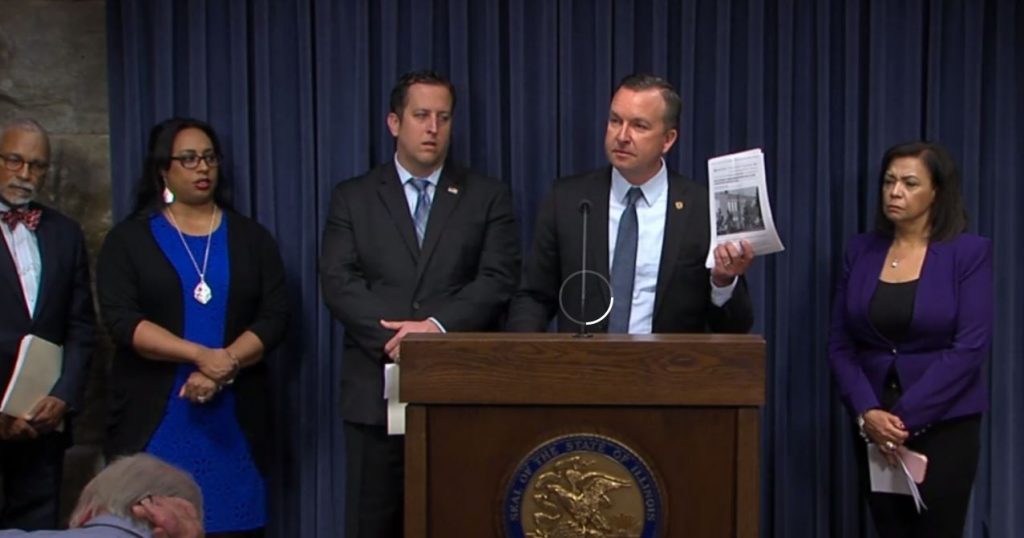 Sen Manar, “It’s come to our attention yesterday, in discussions with the governor’s office and the Senate Republicans, that false and erroneous drafts of school funding numbers somehow made their way out of the governor’s office, and into the hands of a Bruce Rauner campaign group, and are being used for political purposes.”

Senator Manar said he and other Democrat senators are formally requesting an investigation by the Illinois Inspector-General into how this happened, on Thursday, May 18.

As the legislative session draws to its deadline for closure at the end of May, Sen Manar said he had been working for months with Education Sec, Beth Purvis, and others in the Rauner administration, to come up with a new funding formula that would improve the distribution of funds, that currently put many school districts at a disadvantage.

Sen Manar, “These are official state documents that were forwarded to a campaign office, in an effort to derail our efforts to pass education funding reform”

This comes as the legislature continues to roll through end-of-session bills, and attempt to pass a full-year state budget for the first time during the Rauner adminstration.   Sen Manar said he brought his version of a school funding reform, SB-1, to the floor for a vote after spending months working with the governor’s office.  He said Senate Democrats were told by the Governor’s office that, if they accept the Governor’s Turnaround Agenda, then they could vote on Sen Jason Barrickman’s education funding reform bill.

The Governor’s “Turn Around Agenda” has never been accepted by the Democrat majorities in the House and Senate.