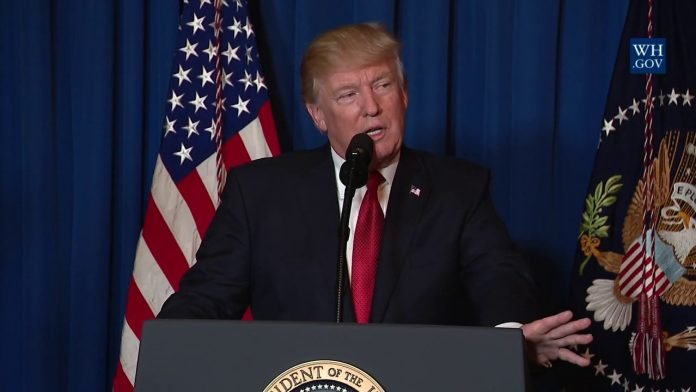 West Palm Beach — Two days after the Assad regime in Syria launched a chemical attack against civilians, which killed men, women and children, President Trump ordered US cruise missile be used to destroy an airbase that was used to launch the gas attack killing Syrian civilians.

It was apparently the images of young babies being killed in that attack, which emotionally affected President Trump, and caused him to reverse his policy previous policy on Syria, which had been to stay “hands off”

In a statement he issued following the attack Thursday evening, [ see video below], Mr Trump said, “Even beautiful babies were murdered in this very barbaric attack. No child of God should ever suffer such horror.”

Reports say that two US Naval vessels fired a combination of cruise missiles, that hit the Al-Shayrat airbase SE of Homs, in Syria.

Some 59 cruise missiles were launched against the airfield. Each cruise missile can deliver massive damage, and can be fired from as far as 1,000 miles away and hit a target within 10 feet of where it was aimed.  That technology comes at a high price, with each cruise missile costing over $1 million.

The Governor of Homs, the site of the airfield, said there were five killed and seven wounded by the airstrike.  Reports say the airbase that was attacked, was the location where the chemical weapons were loaded on a Syrian military jet, that then attacked the civilian village.

A spokesman for the Syrian government, continued to deny that they were behind the chemical gas attack on civilians, “Syria “has not, did not and will not” use chemical weapons against Syrian people or even against terrorists.”

This attack was ordered by President Trump, after he approved a plan to provide a measured response in light of the chemical attack. The launching of the cruise missiles against the airbase came while President Trump was hostinga meeting with Chinese President Xi Jinping at Mr Trump’s Mar-a-lago resort in Florida. Reports say Mr Trump informed the Chinese President of our military action, prior to it being reported.

Some foreign policy observers say this action is a measure of the Trump presidency and draws a distinct difference between the style of a President Obama, who famously said during a White House press conference that if the Syrian regime ever used chemical weapons against civilians, that “would be a red line.”   But when Syria did use chemical weapons during the Obama presidency, no military action followed.

Following the airstrike against the Syrian airbase, the President issued a video statement.