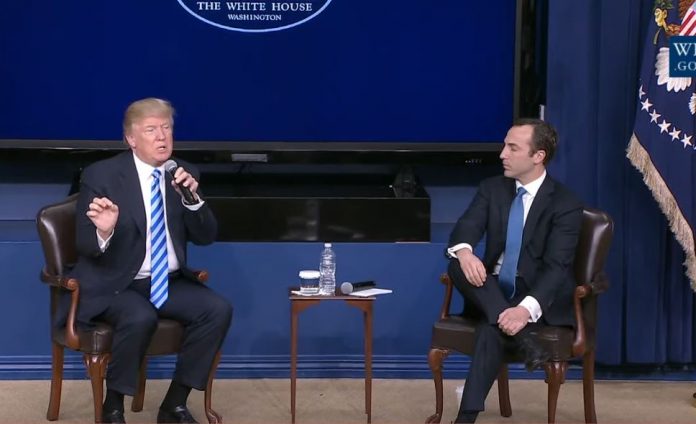 Washington:  At a White House Summit for CEOs from the nation’s major businesses, President Trump took questions from business leaders on the issues of concern to them — and told the audience that his administration would be focusing on cutting the red tape that slows economic growth in both the public and private sectors of the economy.

The President noted they look to give a “major haircut” Dodd-Frank, the regulatory law on financial institutions.   Mr Trump cited a conversation of a small businessman, who told him how the heightened regulations are choking off his ability to borrow more to expand his business.

The President also said, “Believe it or not I’m a strong environmentalist” but he noted that environmental regulations are often handled by a multitude of regulatory departments in government, that force a project to go through many, many permitting applications where one government department is regulating more or less the same thing that was handled by another department.

Prior to the President speaking, Transportation Secretary, Elaine Cho, told the CEOs that the regulatory burden also fell heavily on state and local governments, and those contractors who were hired to build infrastructure projects.

Sec Cho told the group that at this time, it takes 16 years to complete a bridge or to develop a new road, due in large part to the multiple layers of bureaucracy that currently regulates such projects.

She said her department spends about $70 Billion dollars annually, but doesn’t build anything, noting they approve grants that are then sent out for projects at the state, county and local levels of government. She promised that her department would look to cut the amount of permitting that is needed before a project can proceed, to cut down on the 16 years it takes to complete a project.  In addition to fixing the nation’s infrastructure more quickly, she noted it would also save millions of dollars in labor costs if a project could be completed in half the time it now takes.

Some of the CEO’s suggested that the administration should also make it easier to have public-private partnerships, to leverage the federal funds available to meet the nation’s infrastructure needs, with one CEO saying that even “$70 Billion is a drop in the bucket” compared to the massive need to modernize the nation’s transportation and infrastructure needs.