From the Abraham Lincoln Presidential Library: General John Borling, who spent 6 1/2 years as a Prisoner of War in North Vietnam, was imprisoned along with John McCain, among others. He talks of his book of poems, written mentally while he was held a prisoner, and how he communicated these to other American POW’s, through a system of taping a code, heard by other prisoners.  The book is entitled, “Taps on the Walls.”

His moving story, and insights of maintain one’s morale, when cut off from your family, your country, and everything you’ve ever known is a story of courage, honor, patriotism, and a testimony to the human spirit. 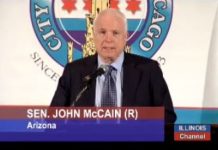