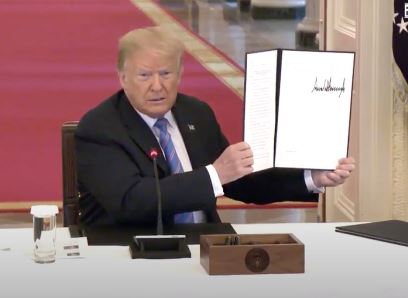 President Donald Trump announced on Friday that he will refocus hiring standards for the federal government based on skills training in an effort to make these roles more accessible.

The order states that the federal government, the nation’s largest employer, must rework job hiring processes to prioritize skills as opposed to college degrees. The order intends to make previously out-of-reach government jobs more accessible to people with non-traditional backgrounds, including those without four-year degrees and those who have graduated from skills-based apprenticeship programs.

President Trump emphasized the adverse effect the pandemic has had on the workforce, particularly for Black Americans, and that this program, along with an increased emphasis on and funding for apprenticeship programs, will bring back the workforce and economy.

“The federal government will no longer be narrowly focused on where you went to school, but the skills and the talents that you bring to the job,” he said. “We want it based on merit.”

Ginni Rometty of IBM, who serves on the American Workforce Policy Advisory Board, which had met prior to the signing, said that IBM has committed to increasing skills-based hires. She said 15 percent of IBM’s new hires last year were “skills-first” hires, which she said were “of course, from the most economically distressed areas and people.” She added that IBM has also implemented an apprenticeship program that now employs 500 trainees per year.

Rometty also unveiled a private sector advertising campaign, in conjunction with Apple and the non-profit Ad Council, that promotes FindSomethingNew.org, a website that aims to educate people seeking new career paths on their options and provide resources available to them, like resume reviews and childcare. The campaign is set to debut mid-July.

The advisory board members also include corporate executives like Tim Cook, CEO of Apple, politicians like Gov. Eric Holcolm of Indiana and educators who run online universities and other alternative education models.

In the meeting, Ivanka Trump also outlined continuing pushes to strengthen vocational programs, including providing over $1 billion annually to fund vocational education programs and an expansion of apprenticeship programs, which have enrolled 750,000 new students since President Trump took office.

These programs have begun establishing nationwide standards to ensure the same educational quality, content and credentials, called Industry Recognized Apprenticeship Programs, which will be established by trade and industry groups to ensure that these skills and degrees will be transferrable across companies.

He said of the programs, “we’re training American and we’re hiring American.”

Apprenticeships, which are popular in Europe, are learning opportunities paid for by companies, often accompanied by associate’s degree programs, that train students in specific skills, such as computer science or programming and maintenance of complex machinery.