January 23, 2020 – Our Exclusive interview with Bernard Kerik, former NYC Police Commissioner. Few people in the United States have insights into the criminal justice system as does Bernard “Bernie” Kerik, who spent his career in law enforcement, is a decorated NYC Police Officer, later Police Commissioner of NYC, and who later was himself prosecuted and sent to jail. Kerik is also a Republican in his politics.

But recently he published an editorial on NEWSMAX, that argues former Illinois governor, Rod Blagojevich should be pardoned by President Trump. Blagojevich was sentenced to 14 years in prison, which was viewed as a very harsh sentence when it was issued. As Bernie Kerik tells us, Blagojevich, a first-time offender who did not engage in a violent act, was sentenced to a longer term in prison than some terrorists who threatened to blow up a shopping mall.

Kerik also questions the position of current Illinois Governor JB Pritzker, who is pushing criminal justice reform as a 2020 agenda, who recently issued a mass commutation of 11,000 marijuana convictions — and yet has come out opposed to a pardon of Rod Blagojevich. It is particularly ironic says Kerik, given the FBI phone recordings of JB Pritzker seeking favors from then Gov Blagojevich, in which Pritzker sought to be appointed to a position, and the two men and their wives would go out to dinner together

It’s been reported that President Trump, who knows Blagojevich from when Blago appeared on Trump’s reality program, that Trump is now considering issuing a pardon. Whether that comes and Blagojevich is released prior to his current end of sentence that is scheduled for March, 2024 is unknown. We hear Bernie Kerik’s arguments why true justice would lead to an early release for Blagojevich.

Kerick’s full editorial can be read via the link below. LINK TO THE NEWSMAX EDITORIAL https://www.newsmax.com/bernardkerik/… 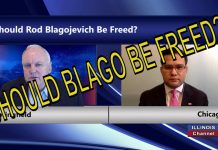 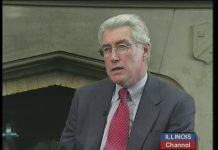