Washington, DC – In World War II, William Walker served in the US Navy in the Philippines. It was the last war when blacks and white servicemen were separated according to their race, and black military men were not accorded the same level of respect as their white counterparts.

In Washington this past weekend, that was partially rectified as WWII Veteran William Walker’s service was honored as he participated with other veterans who flew to Washington DC on an Honor Flight to visit the World War II Memorial on the National Mall. Walker’s son Bill, flew along with his 94 year old father, and says his father spoke of some aspects of his WWII service he had never shared before.

His son tells us, for William Walker, meeting a fellow WWII Veteran, who apologized for the way black servicemen were treated during the war years — was one of the highlights of this trip. 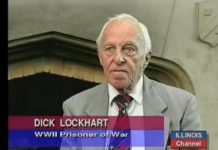