State Capitol – Rep Sara Feigenholtz (D), who was herself an adopted child, is joined by other lawmakers to propose both new changes and an greater focus on what is going on in those agencies responsible for looking out for the welfare of children. In the wake of two recent deaths of young children, who were beaten and tortured before their deaths – we hear lawmakers saying that many parts of Illinois’ Child Welfare programs are broken – still recovering from years of under-funding, and the lack of funding to nonprofits during the two years when the state passed no budget.

May 7th, the day of this press conference, the Auditor General release a report siting many failures of DCFS, including that an emergency hotline number was answered by a recording. We hear from a young man who tells his story of being sent to a family who then beat him, forced him to take cold showers, and abused him.

This is a festering problem that has been broken for years. Perhaps the deaths of two children and their tragedies, can awaken those who are empowered to look out for the welfare of children who become wards of the state. 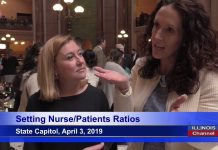 Is Illinois Last in the Nation in Nursing Home Care?