State Capitol, March 27, 2019 – The recent murder of innocent individuals at a factory in Aurora, has moved gun control to the top tier of legislative action at the State Capitol. But at their annual Illinois Gun Owners Lobby Day [IGOLD ], thousands of gun owners from across the state marched on the state capitol, to make a clear message to lawmakers. They want those lawmakers who wish to continue to apply more laws, regulations and fees on gun owners to understand, they’ve had enough.

A central theme of those at the march is that the Second Amendment in the US Constitution, protecting “the Right to Keep and Bear Arms” is not an option to bear arms, it is a RIGHT to bear arms. Those in the march say the lawmakers – especially those from Chicago – fail to understand that laws on guns will never reduce the crime they say they wish to eliminate, because criminals don’t follow the law. So no matter the changes sought, they say gun laws don’t stop gun violence.

They also argue that the current gun laws are frequently not enforced. And they point to the example that the shooter in the killing at the Aurora business, wasn’t supposed to still have a gun, but the law on the books wasn’t properly enforced.

The annual march on the Capitol is organized by the Illinois State Rifle Association. Those in the State Rifle association and others are continuing to push back in the courts on cases that challenge laws which they say are unconstitutional. The gun owners note that Illinois was the last state in the nation to allow Concealed Carry to be legalized and only then when it was forced upon the state by a Federal Court order. They argue this is an example of the Unconstitutional application of the laws in Illinois when it comes to the Right to Keep and Bear Arms.

Following the rally, the thousands of gun owners took to the Capitol and the House office building, to knock on the doors of lawmakers who represent them, and to lobby them against the passage of new laws or fees that would be applied to gun owners. 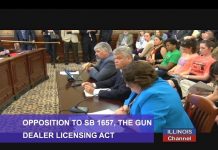