State Capitol, March 4, 2019 — After years of no budget being passed, and further cut backs in the “Distributive Funds” — that portion of the income tax money that goes to local communities, the mayors of Macomb, Cairo, and North Chicago say it’s time to quit treating cities as a junior partner, give them regulatory relief and help them to serve the citizens of their communities.

Led by Brad Cole, the Executive Director of the Illinois Municipal League, the mayors discussed their legislative agenda, and shared how their efforts to maintain city services — like clean drinking water and water pressure in their communities is threatened after years of increased regulations on them by state government — demands that come with no funding attached.

Mayor Michael Inman of Macomb, noted the recent project to maintain and repaint the city’s water tower cost $1,200,000. This is also a reason the mayors say the state needs to pass a new Capital Funding bill. Such bills are used to allow the borrowing of billions by the state in a Bond Fund, that is then sent out to communities and entities around the state for the purpose of repair, replace or building of new projects. 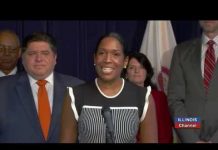 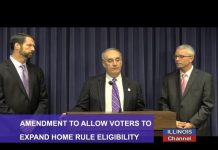 Proposal to Expand Eligibility for Home Rule in Illinois 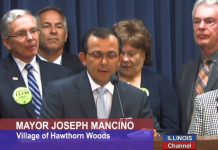