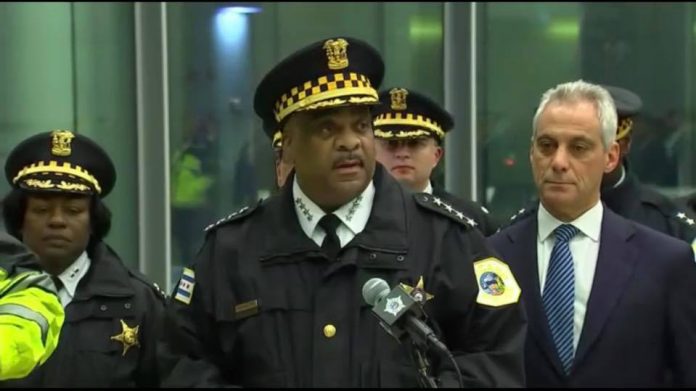 Chicago [Photo courtesy of NBC Chicago] — What began as a domestic disturbance in the parking lot at Mercy Hospital, resulted in a rapid escalation that left four people dead.

According to Chicago Police Chief, Eddie Johnson who briefed reporters on Monday evening, a dispute took place in the parking lot between a woman, who was an employee of Mercy Hospital, and the shooter, with whom she had a relationship.  According to an eyewitness to the struggle on the parking lot, the unidentified male pulled a gun out of his waistband and shot the woman.

Prior to the shooting in the parking lot the eyewitness alerted others and police were called to the scene. They arrived shortly after the shooter had shot the woman with whom he had a relationship.  The shooter ran inside Mercy Hospital with the police giving chase.  A gunfight then ensued inside the hospital, where another woman, identified as being a doctor, was shot and killed.

Also shot was Officer Samuel Jimenez, who later died of his injuries.  Another officer would have become a victim of the shooter, but a bullet fired at the officer struck the officer’s handgun, which was still holstered, embedding itself in the handgun.

The shooter also died, but it is unknown whether he was shot by police or if his wound was self-inflicted.