Springfield, October 24, 2018 – She’s a former staffer with Sen Dick Durbin, but what caused Betsy Londrigan to run for Congress, happened several years ago when her oldest son was hiking and fell ill after a tick bite. What followed was a nightmare of nearly losing her son, who came so close to death he was given the last rites several times.

To hear Londrigan tell her story, it’s healthcare and the need to have affordable coverage that is her primary reason for seeking election. She’s running against Congressman Rodney Davis (R), who also served as a congressional staffer before he was elected to the US House in 2012. That election was razor thing — he had the closest race in the United States that year of any congressional contest. Yet in 2014, when he sought reelection he won with nearly 60% of the vote.

Betsy Londrigan’s a first timer when it comes to running for office, and she’s hoping this year will be more favorable for Democrats. She, like Congressman Davis, would hope to see more funding for infrastructure projects, both in Illinois and around the nation. She notes that agriculture is also a major issue in the district, and that her family still owns the land her grandparents farmed. Given the redistricting games around the nation, many congressional districts are “safe seats” where one party has an overwhelming advantage, and are non-competitive.

But if Democrats are to retake control of the US House, they need to win in districts like Illinois’ 13th district, which runs from the Mississippi to over by Urbana and a large area to the north if. It’s such a huge land area that Lonrigan says she’s already put over 50,000 miles on her car driving around the district to attend meetings and talk with voters. 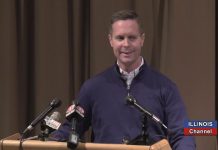 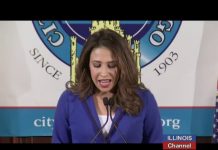 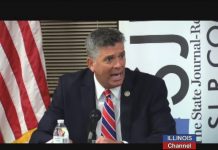 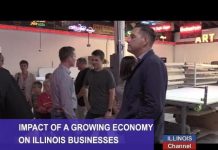