State Capitol:  On the day that students across the nation walked out of their schools in protest the lack of action of the many school shootings, the Illinois Senate passed three bills further regulating guns and gun accessories.

The Senate voted in HB-1467, to ban the sale of Bump-stocks, which can turn a semi-automatic weapon into fully automatic.  A fully-automatic weapon is one which will continue to shoot when you pull the trigger just once.  Automatic weapons were outlawed in the United States in the 1930s, but the bump-stock accessory gets around that technicality and transforms a semi-automatic into one that operates much like a fully automated weapon.  A bump stock was used by the shooter in Las Vegas when he shot randomly into a crowd attending a concert killing 58 and wounding 489.

The Illinois Senate also passed HB-1465, banning the sale, delivery, and possession of “assault weapons” to/for anyone under 21.

But opponents say this will be challenged in court as being unconstitutional, given the US Constitution does not set an age limit on gun ownership, but says citizens have the right to “Keep and bear arms.”   They also say that this law would make such weapons that are currently owned by citizens under the age of 21 illegal.  Such guns can cost hundreds of dollars, and the argument goes that this violates the US Constitution’s “takings clause” which says that property cannot be taken by the government without just compensation.

The Senate also passed HB-1468, which requires a 3 day (72-hour) waiting period after the purchase of an assault weapon.

And, we don’t yet know if these bills will be signed into law by the governor, who is already facing a massive revolt by the conservative elements of the state’s Republican voters.

The Senate action, applying more gun regulations, comes in the wake of Gov Rauner vetoing a bill, SB-1567 earlier this week, that would require Illinois gun dealers to obtain a state license. In his veto message, the governor said the bill would add regulations that are overly burdensome on small businesses – without making the public safer from gun violence. The governor said that many of these regulations included in the vetoed bill are already applied by federal law.

“We have ample proof that such narrowly focused legislative responses make for good political cover, but they do little to stop the illegal flow of guns into Illinois or prevent people from committing thousands of crimes in our state each year with illegal guns.” the governor said

Gov Rauner says he wants lawmakers to name four members from each caucus in the legislature to a commission that will study mental health and ways to improve school safety. But that drew sharp criticism from many Democratic lawmakers and candidates for governor.

A spokesperson for the Pritzker campaign released a statement on the Governor’s veto of the gun dealers’ licensing requirement,  “Rauner had a concrete solution to help prevent gun violence on his desk, but with his primary just a week away, he decided to play politics instead of doing what’s right.”

On Wednesday, the Gov spoke with reporters about his effort to form an inter-state agreement on controlling gun sales.  This in part is in response to many in Chicago who complain that despite the city’s gun regulations, illegal guns come in from out of state.

He also wants the Illinois Terrorism Task Force to work with schools on how to improve their security. 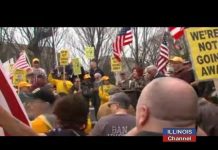 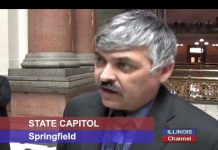