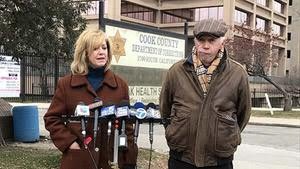 Chicago – The “Trust Act” was one of several pieces of legislation Republican conservatives said was why they broke with Gov Rauner.  Opponents say the legislation makes Illinois a “Sanctuary State.”  The new law in essence says police officers will not arrest or report individuals who are in the state illegally, unless they are guilty of another offense.

In addition to the Governor signing HB-40 into law, which allows for state funds to pay for abortions, the signing of the “Trust Act” is what lead to many former supporters of Gov Rauner to break with him. Rep Jeanne Ives among them. On Thursday in Chicago, Rep Ives held a press conference with Brian McCann, whose brother was dragged to his death by an illegal immigrant.

Few Republicans supported the “Trust Act” being signed into law. But it was strongly endorsed by Democrats.  Supporters say police need to have cooperation of witnesses to crimes, and to report on other suspicious actions, but they will not do that, if those witnesses are in the country illegally and fear they would be deported if they cooperate with law enforcement.

“To date, there have been nearly 3,400 shootings and almost 650 homicides in the city of Chicago alone. As leaders, we should be focused on protecting families, not criminals.

Governor Rauner betrayed people, like Brian McCann, who is still awaiting justice for his brother, Dennis McCann. He betrayed law-abiding families in favor of political pandering.

By signing The Trust Act, the governor made all of us less safe. I am ready to lead the charge against the pandering political class. Illinoisans from all walks of life want the security that comes from knowing violent felons will be prosecuted to the fullest extent of the law.

Ruling Class types like Rauner and Rahm are very cavalier with the lives of others people. They use people as the means to their political ends.

Rauner said he would meet with victims families before signing sanctuary state. Another lie. Another betrayal. He never did.

I’m a pro-legal-immigration conservative. America as a beacon of freedom and opportunity for people the world over is a good thing and should be maintained. But we cannot be without the rule of law.

Rauner and Rahm think they are above the law and thus can decide who has to follow it and who doesn’t.

Sanctuary state protects those who violate the law expense of those who follow the law.

Sanctuary state pits law enforcement agencies against one another rather than encouraging cooperation in the interests of making communities safer.

Sanctuary state should be repealed. As Governor, I won’t pretend not to be in charge. I will lead this charge. With Republican colleagues like John Cabello and downstate Democrats this is doable and should be done.”