State Capitol:  In a major victory for Gov Rauner, on Wednesday, House members attempted to override the Governor’s veto of a bill that would prohibit municipalities from enacting “right to work” ordinances.  But the veto override attempt failed by ONE vote.

As a result of today’s vote, local municipalities can continue to pass local rules that would allow workers from work without having to pay union dues.  Thus far, only Lincolnshire has passed such a local ordinance, but the Legislature’s Democratic leaders, wanted to take that power away and make it a misdemeanor to enact such laws.    Unions, who overwhelmingly support the Democratic Party in Illinois, want to keep the so-called, “Right to Work” movement from gaining ground in Illinois.

Gov Rauner and many Republicans argue that having the right to work without being forced to join a union, is a basic freedom.   They also argue that the forced union participation is causing businesses from considering Illinois as a location when the look to expand operations, or move their business.

Republcan Rep. Jeanne Ives, who is considering running against Gov Rauner for the Republican nomination for Governor, pointed to the recent decision of Toyota to skip Illinois when it looked to build a new plant, and of FoxComm, moving its new plant just across the border in Wisconsin, rather than come to Illinois.

But earlier this week, it looked as if Gov Rauner would be facing another override defeat. On Tuesday, the Illinois Senate voted to override the Governor’s veto of SB-1905, which would prohibit local municipalities from enacting laws that allow “right to work” rules.

The Senate vote was 42-13, with a number of Republican senators voting with Democrats for the override.

Allowing Right to Work rules at the local level has been one of the prime financial reforms pushed by Gov Rauner.  Last December, Lincolnshire passed such a rule that prohibits requireing private sector workers to pay union dues against their will.

Many states surrounding Illinois have either statewide Right to Work laws, or allow a local municipality to have them.  SB-1905, would prohibit such local control over participation in a union.

In response to the Senate vote, the Illinois State Chamber of Commerce released a statement, “Illinois is surrounded by right-to-work states. As the Illinois Chamber has stated before, right-to-work ordinances would make Illinois communities more competitive for job growth and investment. However, it is not the only way for Illinois to compete.

Real workers’ compensation reform, property tax caps and smart investment tax policies might make right to work unnecessary. Given that none of these priorities has been enacted, the recent vote to strip communities’ ability to decide for themselves if right to work is right for them is yet another discouraging development for our state.”

But the Governor is not out of the legislative woods just yet.  A “Motion to Reconsider” was filed that will allow another vote to be held — later in the fall Veto Session, during the second week of November.

And with a margin of one vote making the difference, some heavy duty arm twisting could mean SB-1905 could still become law in Illinois before December. 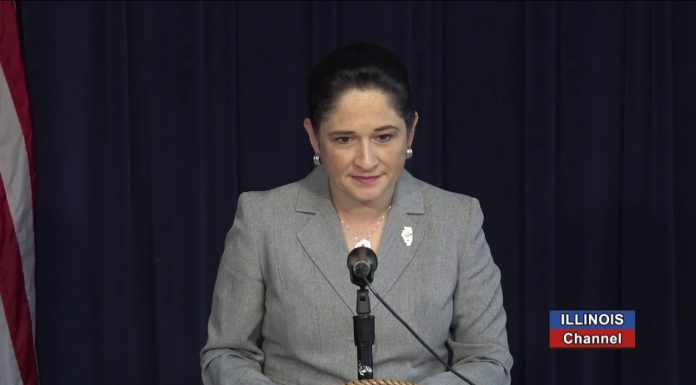 State Treasurer Mike Frerichs, on Savings Accts for the Disabled