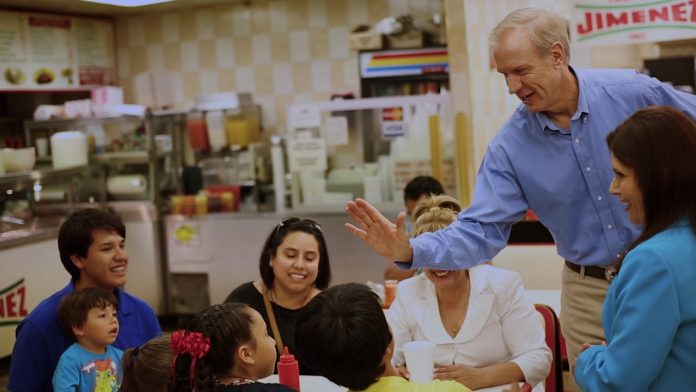 But wonder no more — Gov Rauner is seeking another term.

His decision was announced via the release of a two-minute video, in which the Governor narrates a script that starts out saying, “They said it couldn’t be done..”  and then proceeds to make the case that he’s done what apparently others couldn’t do. [see video below]
.
But many voters, of both parties, might ask,  what IS it that you’ve done that justifies another four years?    If voters were expecting a financial turn around for the state, a number of voters around the state might say, ‘your administration seems to support the idea that those who said it couldn’t be done, are correct.’

Last month, the state lost 10,000 + jobs.  The state owes about $15 Billion in unpaid bills, up from approximately $4 Billion when the governor took office.  The state has faced multiple credit downgrades during Gov Rauner’s term, and only avoided junk bond status, when members of his own party voted with Democrats to pass a budget over the Governor’s veto.

He proposed a “Turnaround Agenda” when he came into office, but none of it was passed;  not term limits, not redistricting reforms, no pension reforms, no lowering of the workers compensation insurance costs.   The Governor’s never proposed a balanced budget, though he continues to insist that’s one of his top priorities.

And the only budget passed in his term thus far, came when 15 House Republicans and one Senate Republican voted to override his veto of a budget that was constructed with bipartisan input, primarily from the Senate President and the former Republican Senate Leader.

It’s really not that surprising he’s announced for reelection , given he’s been running commercials claiming credit for funding education, and passing a bill to refomulate how the state funds K-12 education.  But even here, many say the governor is taking credit where it belongs to others.  The principle author of the education funding reform bill, was Sen Andy Manar (D), who spent years working on the bill.  Sen Kim Lightford (D) was also heavily involved in its passage, as was Republican Jason Barickman (R).  And in the House, Rep Will Davis (D) was a primary mover of the bill.

The Education Funding bill, one of the few major legislative accomplisments of the last year, was also due to major involvement of the Illinois Assn of School Boards, and the Illinois Association of School Administrators, among others.

There was already great frustration within Republican ranks in the legislature, that was building with the continued standoff over the budget. But this summer two pieces of legislation led many Republicans in the legislature and around the state to say they want a divorce from this governor, who many now say is a Republican in name only. The divorce began with the Governor’s signing SB-31, a bill that many in the Republican party say makes Illinois a “sanctuary state”, and given his signing of HB-40, which provides for the use of state funds for abotions — when many Republicans say he lied to them, and said he would veto that bill — the governor’s support within the Republican party is scant.

Many allies have turned against him.  John Tillman, CEO of the conservative Illinois Policy Institute, have come to call him, “Benedict Rauner.”   Sen Kyle McCarter (R), a conservative from Lebanon, Illinois, has posted videos on Facebook, saying in essence the governor can’t be trusted and lied to Sen McCarter and others.

One-time Rauner supporter, Republican consultant and commentator Chris Robling, of Chicago, recently penned a column that requested the governor step aside as a candidate, saying he was neither a Republican, nor electable.  Here’s a small portion from that editorial, “Sadly, due to his performance in office, his treatment of the threadbare institution of Illinois Republicanism, and most importantly for his simple failure to achieve much of anything in his 32 months in office, I have concluded that Bruce Rauner is no longer electable in November.”

So dismayed are many conservatives in the Illinois Republican Party, that they are looking for someone to run against the governor for the Republican nomination.

As of this writing, no one has entered the field, but conservative House member, Jeanne Ives, (R-Wheaton), who is a graduate of West Point, has been encouraged to run, and is apparently considering it.

In his video announcement, the Governor is shown riding a Harley, looking rather hard-core, in black leather.  He says the choice is to give in, or fight the forces of corrupt government that got us into the sad state Illinois is now in.

The video concludes with Gov Rauner saying, “I choose to fight.”

But many of his critics are saying, anyone can fight.  They want someone who can also govern, who can accomplish things, who knows he has to compromise on some issues to get his part of a bargain passed.  And even those on the Republican side of the House, are frustrated with what they say is Rauner’s heavy handed governing style, that seems to put confrontation over governing.

Behind the scenes in the Capitol, you hear it was Rauner’s stubbornness and lack of political judgement that caused former Republican Senate Leader, Christine Radogno to resign from the Senate and leave state government.

But ulimately, the Republcans are also faced with the reality that they are likely to face a billionaire Democrat as the nominee for governor.  And to have any chance to overcome a return of the Democratic Party having full control of state government, Republican voters may have no choice but to vote for another term for Bruce Rauner, and have his millions to fund legislative races.

Or… Republcan voters can just skip the vote for governor and merely vote for legislative candidates.  They can also decide to simply stay home on election day.  No doubt, that would cause some Republican lawmakers their reelection.  And if Republican voters in Illinois skip election day, it could also undermined the re-election of some US House members.

But this much is known….that Bruce Rauner is saying he’ll again be a candidate for the Republican nomination for governor, is not a cause for celebration among many Republican voters in Illinois.