Chicago, September 18, 2017 ––  Gov Rauner said his trip to Asia was very successful, and that he had a number of great conversations with business leaders in Japan. He noted that more than 50,000 Illinois jobs are tied with trade with Japan. But when asked if he had received any firm commitments from Asian firms to invest in Illinois, he said there was a lot of interest in the state, but no firm commitments just yet.

In addition Gov Rauner signed HB-162, the Edge Tax Credit that now will also target some funds to low income areas of the state.  This passed with support from both sides of the aisle, and is intended to help spur economic development.

The Illinois Chamber of Commerce CEO, Todd Maisch said in a statement, “We applaud the governor for signing this legislation that is a long overdue restoration of EDGE. Gov. Rauner signing this bill, which passed out of the Legislature with bipartisan support, provides Illinois with a real economic development tool vital for the state’s growth.
This bill contains major improvements including additional support and assistance for distressed communities across the entire state. HB 162 is beneficial for the entire business community.

The Illinois Chamber believes this is only the beginning of bipartisan efforts to strengthen Illinois’ business climate.”

Gov Rauner also mentioned the state is making a strong effort to see if Chicago can be the second HQ for Amazon, which announced it is now looking for a second major location for it’s executive management team.  He also said in case St. Louis were to be chosen, he’d want the state in the Metro-East to be ready to work with the St. Louis development plan for Amazon, so Illinois would then still benefit. 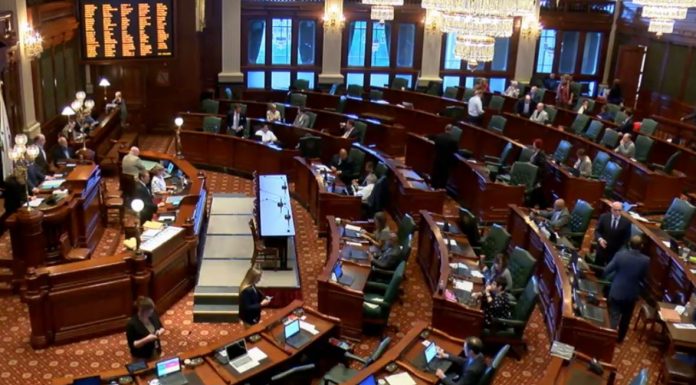 Gov. Rauner Addresses his Cabinet on the Financial Crisis