Springfield — Though they cancelled their Democrats’ Day at the State Fair, the Illinois Democratic Chairmen and their party supporters, gathered to layout their themes for running against Republicans in 2018.  Over 1800 Illinois Democrats gathered from across the state to hear their candidates and party leaders make the case for trying to take back the Governor’s mansion, and build their majorities in the Illinois legislature.

At the heart of their comments is both their opposition to the Trump presidency and, in their view, a very similar abrasive, confrontational form of  governing by Governor Rauner. 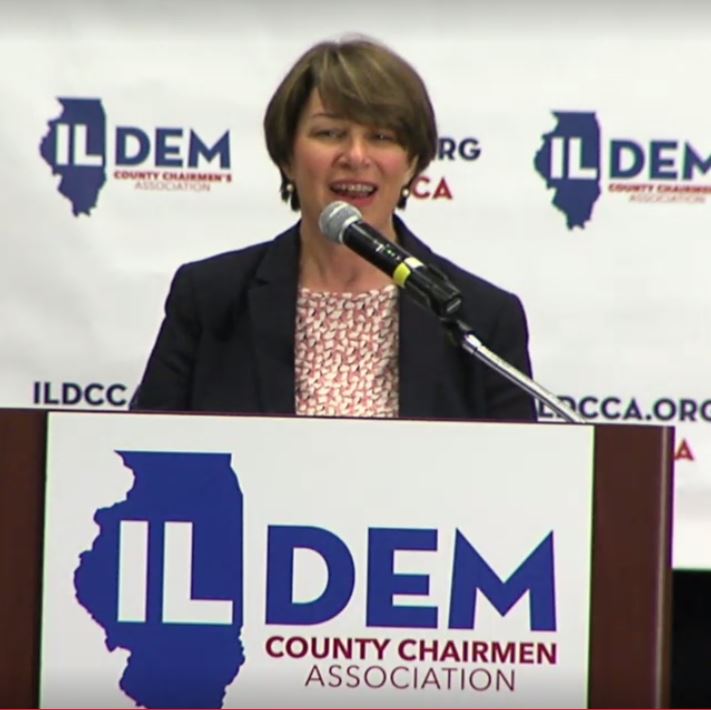 The keynote speaker at Thursday’s gather was Sen Amy Klobucher (D-MN) who attacked President Trump’s comments on the riots in Virginia.

Then, noting the similarities between the Minnesota’s economy and Illinois, she noted the need to build agriculture exports, have great paying jobs, and invest in education.

“We need American businesses to invest in America, not overseas.” said Klobuhcer, who ironically, sounded a theme that was very close to the statements of President Trump on the economy.

As Democrats from around the state gathered in Springfield for their annual meeting of the county chairmen, a number of candidates used this as an opportunity the night before to hold receptions and greet potential supporters, including JB Pritzker and his running mate, Rep Juilana Stratton.

If the size of the crowds at political receptions is any gauge of the course of a campaign, then certainly JB Pritzker is viewed by many Democratic voters as being a leading candidate.  But then Pritzker is a billionaire, who’s been in a position to run numerous television ads across the state, adding to his name recognition.

With the potential of having two billionaires running for governor in 2018, Illinois may well have the most expensive gubernatorial race in the nation.

The themes raised by both the Republicans at the state fair, and Democrats at their rally today in Springfield, will bombard Illinois voters over the next 18 months in a growing flurry of television and radio commercials.