State Capitol, July 26, 2017 — It was a Special Session of the legislature at the Capitol, where the lawmakers were supposed to take action to resolve the standoff over SB-1, the Education Funding bill.

But it has become apparent that it is virtually impossible for this governor, and the Democratic legislative leaders, to do anything together on legislation, until they’ve wrung the last ounce of political gamesmanship out of the process.

For the only real action that took place on Wednesday, was a battle of press conferences between Governor Rauner, Speaker Madigan, and Senate President John Cullerton.

Gov Rauner actually held TWO press conferences Wednesday, the first around 11:30 am, and then again at 2 pm, after Sen. Cullerton told the press what he wanted to say to Gov Rauner, if the governor would have met with him.

Not only was there no agreement on the Education bill, there was no agreement between what the governor said was the conversation with Sen. Cullerton, and what Cullerton said they talked about.

On the surface, the division over the Education bill concerns some $250 million the bill would send to Chicago School District, so Chicago can make its payment to the teachers pension plan.   Gov Rauner says that is fundamentally unfair to taxpayers and other school districts.  The governor would take those millions of dollars and spread them around the state to other school districts.

Speaker Madigan told reporters this is just being fair to Chicago to have the state make a payment toward their pension.  [although a deal was made back in the Edgar administration for Chicago schools to have their pension system separate from the rest of the state].

When asked by the Illinois Channel, whether the governor was right to say this payment to Chicago was put in SB-1, at the last moment, the Speaker said this had been discussed over many months, and just “the method of payment changed.”

Yet because of that pension payment in the bill, the governor said he will use his amendatory veto once it comes to him to remove that payment to Chicago.

Senate President Cullerton, thus far has refused to send the bill to the governor, even though it passed the legislature at the end of May. It’s being held back on “a motion to reconsider”  a parliamentary maneuver.

With the clock ticking toward the start of the new school year, and now no education funding bill yet signed into law, the governor gathered Republican lawmakers to join him at his afternoon press conference and said the Democratic leaders were purposely forcing a crisis to allow them to send hundreds of millions of taxpayers money to bail out Chicago Schools.

In an earlier statement, the governor said the crisis in funding of the Chicago teachers’ pension system, was due to mismanagement by CPS over the years. He said that any changes needed to reform pensions should be addressed separately.

During his press conference, an exasperated Senator Cullerton said he called the governor Wednesday to ask for a meeting.  He said the governor replied, that he would meet only if Cullerton agreed to send him the bill.

Cullerton told reporters, that he replied to the governor, “Well that’s what I want to talk about first,” to which the governor then refused to meet. 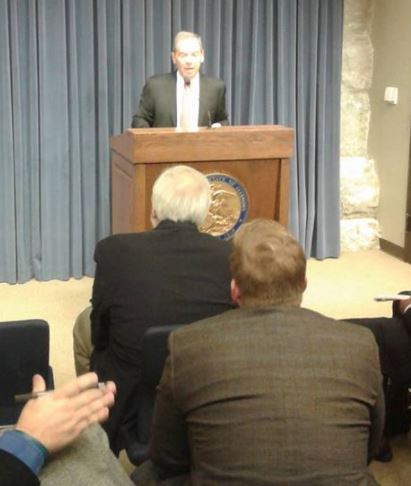 The Senate President told reporters he wanted to tell the Governor he’s making a mistake by not meeting.  “If the Governor just uses his Amendatory Veto, and then the legislature overrides the veto, then the governor is not going to get anything he wants.  And if the legislature fails to override his Amendatory veto, then we have no education bill and we will have to start over.”

Both the Governor and Democratic Leaders are playing politics over the education funding bill.  Senator Cullerton, could release the bill to the governor for his signature if he wished, but he wants to preserve the Chicago pension payment.

While the governor, is taking the money put in to pay the Chicago pension, and saying those hundreds of millions, [which he also says should not have been added to the bill], could be spent on school districts around the state.

This allows the governor and Republican lawmakers to make the case that Springfield, Decatur, Rockford, Quincy, etc. districts would get hundreds of thousands more in education funds, if the governor gets his way.

And watching this action from around the state, are school principals and administrators, going through the steps of getting their schools ready to open in August, while not knowing if any of their funds will be available to help them open their doors.

Many schools say they have enough money on hand to open their doors in August, but depending on the district, many will run out of money by December.  While a number of other schools around the state, will not be able to open their doors at all, should SB-1, not be signed into law within the next three weeks.