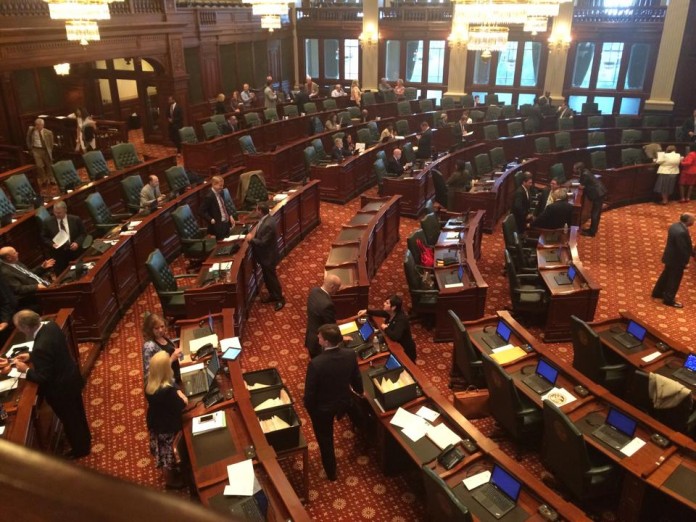 State Capitol:  As the clock clicks down on the last day of the current fiscal year, with Bond houses saying they’ll lower Illinois’ credit status to “Junk Bond,”  the Illinois House on Friday morning voted on an amendment to the proposed Budget for FY 2018, that shows overwhelming support for funding state operations.

The vote passed with 90 votes of support, far more than enough to override a veto of the budget should that be what Gov Rauner would opt to do, once a budget hits his desk.

Following the vote, which is a first stage of getting the budget passed by both House and Senate members, Speaker Madigan announced to the House members,  “The work of the governor and General Assembly is clearly not done. As a result, the House will remain in session on Saturday. While we’ve made progress on solving the governor’s budget crisis, we are not done. We will remain in session to continue our progress toward passing a balanced budget. In light of this ongoing progress, I would ask that bond rating agencies temporarily withhold judgment and allow legislators time to negotiate a bipartisan, balanced budget.”

The Speaker also said he was calling for another meeting of the Legislative leaders, and as of 1 pm on Friday, that had yet to end.

The debate on the floor was characterized by both conciliation and fatigue.  Few spoke against the bill.  One who did, Rep Jeanne Ives (R), noted several major spending issues and wastes of money, that this proposed budget would continue to fund.

But Ives’ House Leader, Rep Jim Durkin, said he would commit to vote for the amendment on the floor, on the budget when it was debated, and the he would work to contribute enough Republican votes to provide a veto-proof margin, should that be required.

During the debate on the House floor, it was announced that in the Senate, Sen Bill Brady, the Republican candidate for governor in 2010, was elected as the new Republican Senate Leader, to replace Sen Christine Radogno, who announced she was resigning from the legislature, effective at the end of business on Saturday.