Springfield:  The last full budget passed by the Legislature expired June 30, 2015.  The last funding bill to legally fund state operations, ran out on December 31, 2016.  Yet, here we are nearing the middle of March, with no state budget in place — and state workers continue to get their paychecks.

Attorney-General Lisa Madigan argues this is not legal. And now having waited in vain to see if the Governor and Legislature would quickly pass a new funding bill at the beginning of 2017, she’s calling foul, and wants to pull the plug on state workers being paid when there’s no legal authority in place currently to authorize their payroll.

On Wednesday, March 7, the Attorney-General filed a motion for the Illinois Supreme Court to hear her arguments on an expedited calendar.

Also on Wednesday, Gov Rauner told reporters he thought the Attorney-General’s actions were nothing more than a political ploy to force him into a budget agreement that goes against his stated goals of having fundamental change, before he’d agree to having a tax increase as part of a larger budget deal. 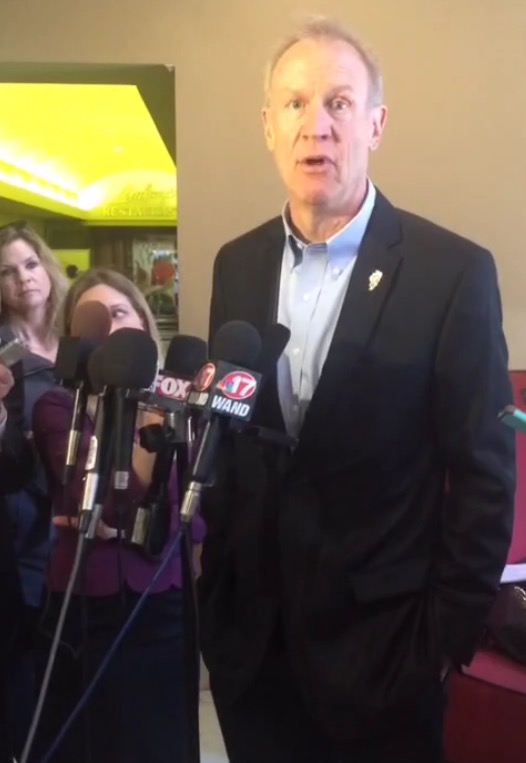 When asked for his reaction to the Attorney-General’s motion, Gov Rauner said, “This is wrong.  This an attempt to create a crisis and force a tax hike without any changes to our system.”

Gov Rauner went on to say that the Attorney-General, whose father is House Speaker Madigan, was coordinating her actions with Comptroller Mendoza (D), and with Speaker Madigan, who the governor said was organizing this entire effort.

For while the state has been operating for two years without an approved budget, the financial pain of no budget being in place, has been borne primarily by nonprofit organizations that do work on contract with the state, state universities and colleges, which get major funding from the state.  And, private contractors who’ve done business with the state, which may be a for-profit firm, or a nonprofit hospital.

As a consequence of the state piling up IOUs to contractors, schools and nonprofits, the backlog of UNPAID bills, is now $ 12,312,671,661.

So while the Governor said Wednesday, that the Attorney-General’s efforts are to cause a crisis in order to force his hand and pressure him to agree to a budget deal, many others argue the state IS in a crisis, and has been for over a year.

But there’s not a crisis for state workers — they’ve always been paid.  And K-12 schools and been one of the few areas of the state budget that’s been passed, so schools operate, and teachers are being paid.

So the real impact of the financial pain around the state, has been muted, and limited to those organizations who have had to tighten their belts, and cut their employment.  Eastern Illinois University in Charleston, has had to allow over 400 positions to remain vacant. And those who DO have their jobs, had to accept a 3% pay cut, when they had been expecting to get a small pay raise this year.

The University of Southern Illinois, with campuses in Carbondale and Edwardsville, and a medical school in Springfield, have over 500 positions left unfilled. 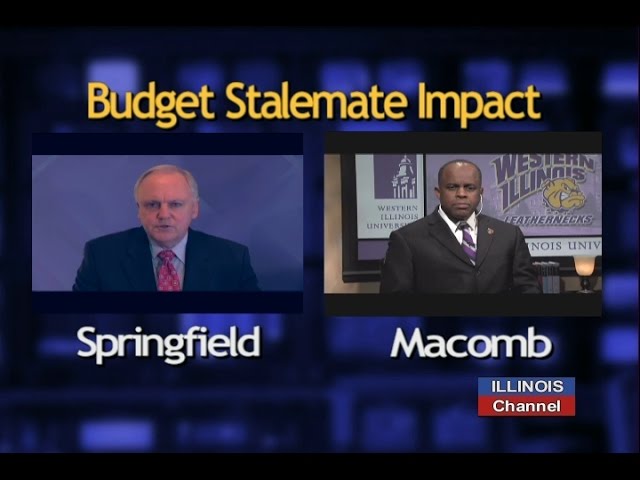 And in our interview with Western Illinois University President, Jack Thomas, last week, he told us of his university having to operate over the last 18 months, without nearly $100 million that it would have had paid to it by the state.

It’s not just a few hundred people here and there that are effected. Like Eastern and SIU, Western IL University is the largest employer in their community.  And in each case, with Southern, Eastern, and Western — the universities are the largest employer and largest economic engine in their region of the state.

Areas of the state, that traditionally have among the highest unemployment rate.  So the loss of hundreds of millions of dollars in state payments is magnified on these local economies.

Late in the afternoon on Thursday, March 9, Reps Sara Jimenez (R) of Springfield, and Avery Bourne (R) of Litchfield, whose district runs just to the south of Springfield, held a press conference to call for the passage of HB-2803, which they say would create a permanent appropriation for state workers, so they won’t be used as pawns in political tugs-of-war.

Here’s audio from that press conference:

It’s not clear when the Illinois Supreme Court will take up the challenge of whether it’s legal to be paying state workers without a spending authority in place.  But should the Governor lose the case that the Attorney-General wants to bring, and state workers then have their paychecks stopped, the crisis that has hit pockets of the state would hit hard everywhere, and most state functions would come to a sudden grinding halt.

Whether this is a coordinated political ploy by the Speaker, Attorney-General and Comptroller, is open to interpretation.  But the spread of Illinois’ financial crisis, may soon be magnified to such an extent that the pressure to finally pass a budget would be overwhelming.