Springfield — Members of the Legislature are meeting for their second week of the fall Veto Session, with the potential for some major legislation to still move — notably, there MAY be a resolution to the standoff over whether the state should pass the “ComEd Bill” which would provide some relief to underwrite the operations of two of the state’s nuclear reactors, that ComEd argues are losing money and which they threaten to close down.

That bill, SB-2814, remains a work in progress, with negotiations remaining fluid, and with some who previously opposed the “bailout” of the facilities, now saying they are no longer opposed to the bill — namely CUB and the Sierra Club.  Ameren, the downstate utility, has also come around to the new version of the bill, but again… this is a moving target, at least as far as Tuesday afternoon is concerned.

Following a committee hearing where the bill was discussed, before being sent on for consideration by the full House [ yet to happen], members of a broad coalition, calling themselves the “Clean Jobs Coalition”  told reporters at a press conference, that the bill was a good compromise between the needs of ComEd to have two nuclear plants subsidized, or they would closed them — And, the need for Illinois to expand its “clean energy footprint” in future years.

They argued that keeping nuclear plants operating, was not their preference, but that the bill, that funds more money for the use of alternative energy and the expanded use of energy saving programs — like the use of LED lights — would lead to a savings for all consumers, as the law of supply and demand would mean that the less energy consumers use, the more the savings they’d realize.

But the BIG issue on the table — whether there will be a resolution to fund government services past the current funding stoppage at the end of the year — remains elusive, and there appears to be no breakthrough at this time.

At noon on Tuesday, Reps Dave McSweeney (R) and Rep Jack Franks (D), who is leaving the legislature at the end of his term in January, held a press conference to attack the leadership of both parties in the House, for holding meetings behind closed doors, and not allowing other members of the House to know what’s being discussed, and what sort of deal is being negotiated.

McSweeney noted the Republicans had just spent $60 million in a campaign, in which they ran against raising taxes. He told reporters, that if the Republican leaders and Gov were to come out now and say they are for a deal that includes a tax increase in a lame-duck session of the legislature, that THAT would be “a sleazy move”

Yet despite the concerns of the behind the scenes talks by the governor and legislative leaders — they’ve been having their troubles even agreeing to a meeting time.  Early on Tuesday, a meeting of the leaders was scheduled, but House Speaker Madigan apparently had something more important on his agenda, as he did not show up for the Budget discussions.

It was left to Senate President Cullerton to tell waiting reporters outside the Governor’s office, that the Speaker had a conflict, and the Governor and leaders would see if they could arrange to meet later in the day, to resume their discussions.

On morning newscasts, Gov Rauner announced he wanted to have meetings with Legislative leaders everyday this week, until they could forge a funding agreement, that would prevent government operations again hitting a funding gap, as the current funding bill runs out in about one month. 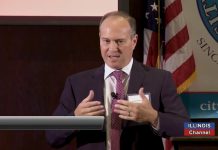 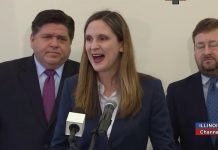 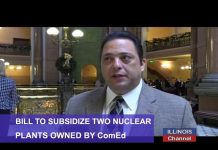 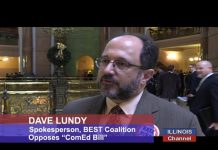