In Illinois the Democrat party holds solid control of both the House and Senate.

But over the last six years, as we see in these maps below of party control of various state legislatures that was compiled by the National Conference of State Legislatures, the Republican Party has been taking control of legislative chambers in many states. 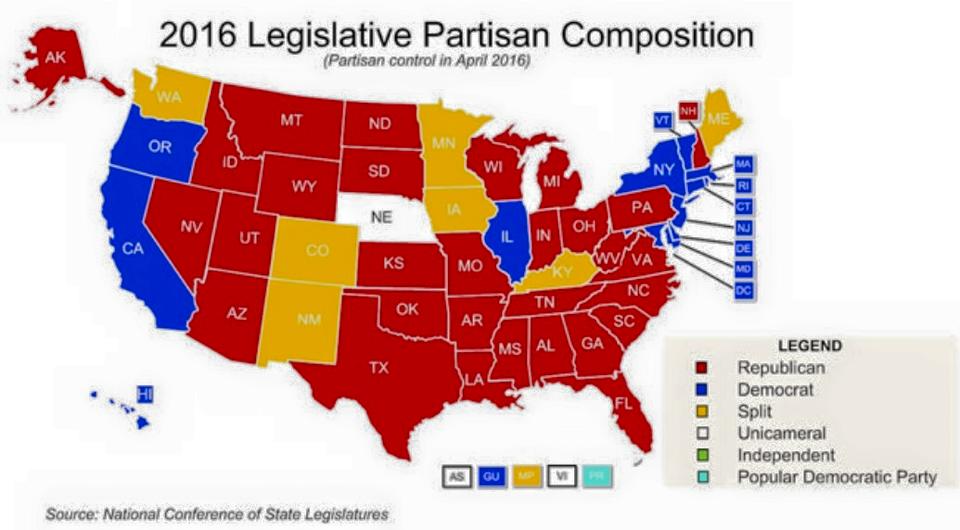 In fact, out of 98 legislative chambers across the country, the Republicans control 68 of them — more than at any other time in history!

And of the 50 states, Republicans hold both the Governorship, and BOTH the House and Senate, in 23 of the states.  Democrats hold that distinction in just seven states.

As this map from 2010 showing the partisan breakdown of state legislative chambers, there’s been a large Republican trend in electing state lawmakers, over the last six years, when compared to the map of 2016 above. 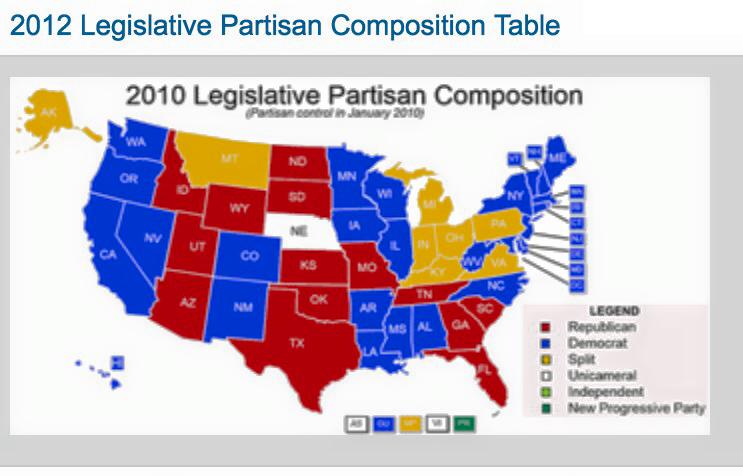 CAN IT HAPPEN IN ILLINOIS?
This year with millions of dollars provided to the Illinois Republican Party from Governor Rauner, the Republican party is attempting to pick up additional seats in the House and Senate. Although nobody expects the Republicans to take control of either chamber.

A number of the very competitive races are downstate.

In western Illinois, retiring Democratic Senator John Sullivan, in the 47th district, is one seat the Republicans believe they can win back, in what is generally a Republican district

In the Carbondale area, Democratic Senator Gary Forby of the 59th district, is targeted. He is a opposed by Harrisburg Mayor Dale Fowler, whose campaign recently received over $1.5 million from the State Republican Party.

And in neighboring 58th Senate District, long time Republican Senator Dave Luechtefeld, is retiring. His seat is being sought by Republican Paul Schimpf, who was the Republican nominee for Attorney General two years ago. While the Democrats have nominated for former Lieutenant Governor Sheila Simon.

But another big story in this year’s legislative races in Illinois, is the large number of incumbents running for reelection who face no opposition in November.   And in both the House and Senate, that’s a big reason why Republicans won’t take control of either chamber.  You can’t beat somebody with nobody.  Although, it’s not just Republicans that fail to come up with candidates.

In the Metro East Senator Bill Haine, a Democrat, has no opposition. Nor in the 50th district does Republican Senator Sam McCann who’s district is south and west of Springfield. Although McCann was challenged in the Republican primary by a candidate who was backed by Governor Rauner.

So these are among the races to watch on Tuesday, to see if the Republican Party’s effort to weaken the stronghold the Illinois Democrats have on both chambers, bears fruit.

Of the 59 State Senators, Democrats currently hold 39 seats, the Republican’s 20. So the Republicans may shoot to pick up some seats, but have no chance of taking control of the Senate chamber in Illinois in 2016.

But next time, supporters need to keep is keep it plain vanilla, in an effort to keep any legal burrs from having it rejected again.   A nonpartisan map may or may not help the Republicans in Illinois pick up legislative seats.  But it may at least help in attracting candidates who feel they have a chance at winning, in a district drawn by a nonpartisan commission, and not one that was drawn to keep viable challengers from running in the first place.