By Shanshan Wang, for the Illinois Channel

WASHINGTON –Speaking to the National Education Association, at about the same time as FBI Director James Comey announced that his agency would not recommend charges against her in the email controversy, Hillary Clinton on Tuesday, 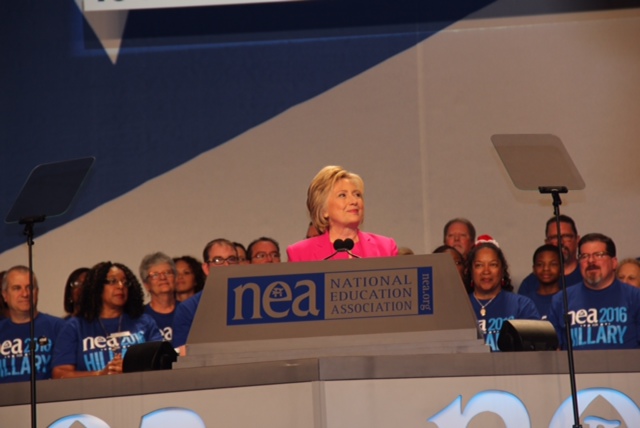 Speaking to the annual convention of The National Education Association, which endorsed her in October, Clinton promised that “educators will have a partner in the White House and always have a seat at the table” if she is elected president.

“When we invest in education, we invest in our country’s future. And we invest in making a stronger economy that works for all of us, not just those at the top,” she said.

Clinton said public school systems need to be serious about raising teachers’ pay because they earn nearly 15 percent less than other college graduates in America. She also said she will include teaching as part of a program to forgive federal student loans after 10 years for those in public.

Earning more cheers from the teachers, Clinton said the role of standardized tests needs to be reduced.

“Tests should go back to their original purpose, giving useful information to teachers and students,” she said. “When you are forced to teach to a test, our children miss out some of the most valuable lesson and experiences they can gain in the classroom.”

struck me because they encompassed all the areas I believe in,” she said.

The presumptive Democratic presidential nominee also stressed on the importance of the teaching technology skills.

The education system is suffering

from a shortage of computer science education in public schools, she said, and promised to make it a priority. She also said educators need more resources and more help from outside the school system.

She criticized Donald Trump’s position on education, saying he “leave out our most vulnerable students.”

“It’s about time so that way we can continue moving forward as a nation rather than constantly moving backwards,” said Alfonso Salais, a high school Spanish teacher from Michigan. “Let’s move on and unify the country as much as we can.”