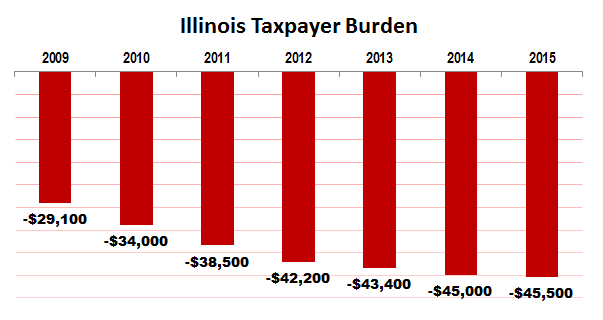 CHICAGO — Despite Illinois’ ongoing financial crises and a new rule requiring Illinois to report all of its pension liabilities, the state continues to hide $8.1 billion of pension debt from taxpayers. This information is released today in a report titled The Financial State of Illinois, by Truth in Accounting (TIA), a Chicago-based think tank that analyzes government financials.

According to the report, Illinois has $213 billion of bills but has only $26 billion available to pay them. This means Illinois still needs $187 billion to pay all of its bills. When broken down by taxpayer, this equates to $45,500 per Illinois taxpayer.

“Because of budgeting and accounting gimmicks the state uses, Illinois has been able to exclude massive debts off its balance sheet and hide related costs from taxpayers,” said Sheila Weinberg, TIA Founder and CEO. “Unfortunately all of these financial problems are coming to a head in Illinois.”

“Illinois is approaching almost a full year without passing a budget. Non-profits have been forced to layoff thousands of employees and Chicago State University almost shut down in April. Illinois’ debt is one of the worst in the country, and its pension systems have received nationwide coverage for their poor condition,” said Weinberg. “With all this financial chaos, it is more important than ever for citizens to have the truthful and transparent financial information they deserve.”